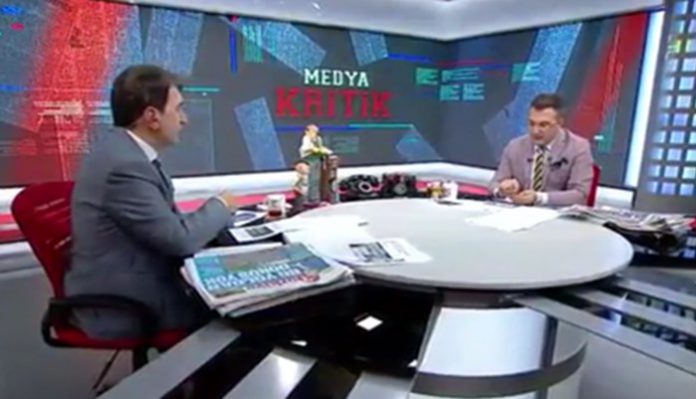 Cem Küçük (R) reads a message from a prosecutor during TV program.

Staunchly pro-government Turkish journalist Cem Küçük has complained about Turkish authorities’ not forcing jailed Gülen movement followers to speak about the group’s activities, suggesting that various kinds of torture could be used to make them talk, the Aktif Haber news website reported.

Küçük’s controversial remarks came during a recent segment of “Media Critic” on TGRT TV, which he co-hosts with journalist Fuat Uğur.

The Turkish government accuses the Gülen movement of masterminding a failed coup on July 15, 2016 and labels it a “terrorist organization,” although the movement strongly denies involvement in the coup attempt or any terrorist activity.

“We have several Fetö

members in our hands such as Ali Fuat Yılmazer, Mehmet Partigöç and Alaaddin Kaya. Why don’t you make them talk? They know many things. Our prosecutor is acting like this: Oh, Fuat, welcome. What is your name and surname? Where did you work, did you do this? He says, ‘No.’ Like this. There are other ways to make them talk. For instance, you can swing them from a window,” said Küçük.

Following the coup attempt, the Turkish government launched a massive crackdown on followers of the movement under the pretext of an anti-coup fight as a result of which more than 130,000 people were removed from state jobs while in excess of 30,000 others are still in jail and some 600,000 people have been investigated on allegations of terrorism.

Yılmazer is a former police chief and Partigöç is a former brigadier general, while Kaya is the former owner of the now-closed Zaman daily. They are all in jail on terrorism or coup charges due to their alleged links to the Gülen movement.

Küçük also said Turkish authorities could use methods of torture employed by Israeli intelligence agency MOSSAD on Gülen followers and kill their family members to force them to talk.

“Let me tell you about a MOSSAD technique mentioned in the ‘Gideon’s Spies’ book. For example, they want to make a Palestinian, Jordanian or Egyptian a spy and they say no. So they kill a family member. They decline again, they kill another family member, and then they have to agree. They have many such spies,” said Küçük.

Küçük’s remarks sparked outrage on social media, with many calling on prosecutors to take legal action against him for openly talking about torturing people.