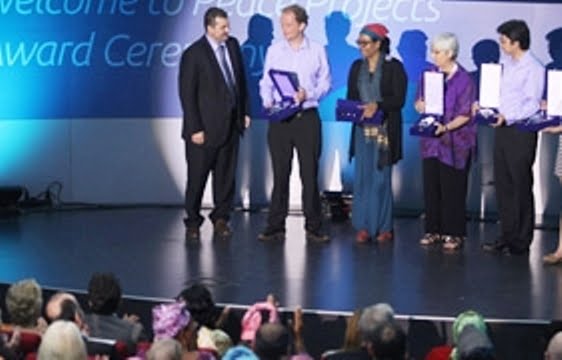 The Journalists and Writers Foundation (GYV), which will make a donation of $50,000 to international peace projects developed to prevent conflict in the world and present solutions for them, held a ceremony in İstanbul on Friday in which 10 peace projects were given awards.

The “International Peace Projects” awards ceremony was held on Friday at the Zaman plaza in Yenibosna, İstanbul. The 10 best peace projects were given awards during the ceremony. One of the peace projects ranked among the top 10 was developed by a young Nigerian named Ademola-Adelehin Ilemobola Olubukola. In this project, Olubukola aims to weaken the culture of violence in Nigerian society with education about peace. Olubukola plans to make education on peace part of the curriculum of the Nigerian education system with his project, thus aiming to decrease young Nigerian people’s tendency to see violence as part of their daily life.

Another peace project, titled “Education for peace: to learn the other’s literature,” which was also given an award, aimed to bring 60 Israeli teachers together with Palestinian teachers to prepare a joint lesson plan. Teachers from both countries will give information about the other country’s literature and culture. Making a speech during the ceremony, GYV Chairman Mustafa Yeşil said peace cannot be established only by slogans such as “No to war” but must develop projects through which problems can be analyzed and possible solutions can be proposed.

In his speech, Yeşil stated that participants in the competition had prepared projects aiming to resolve problems in their geographical locations, adding that the GYV had given priority to those projects that suggested good solutions to the conflicts in their locations.

Recalling that a donation of $50,000 would be given to each of the top 10 projects, Yeşil stated that the three projects that are most successfully implemented would also be given another award. “We plan to give awards to those projects on March 25, 2015 at the United Nations headquarters. This competition will be held annually. The applications for next year have already started,” Yeşil added.