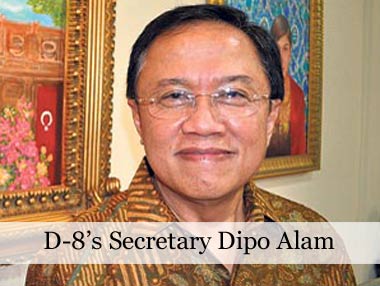 Developing-8 (D-8) Organization for Economic Cooperation secretary-general and Indonesian cabinet secretary Dipo Alam has called on everyone to lend support to schools opened by Turkish entrepreneurs while vowing to donate 50 million Indonesian rupiah ($5,500) to these schools every year.

Alam was given a special award at the ceremony due to his extraordinary efforts to increase cooperation between Indonesia and Turkey. Alam received his award from Turkish Ambassador Koçak.

In his speech, Alam said people should donate to Turkish schools inasmuch as they can afford. “Little or more, everyone should give support to these schools. As a sign of this, I promise to donate 50 million Indonesian rupiahs [$5,500] to these schools from my salary every year,” he said.

The meeting, which drew much attention in the Indonesian media, was also attended by Turkish businessmen and officials from the Kimse Yok Mu aid association who went to the country to distribute aid on the occasion of Eid al-Adha. During the ceremony, firstly students who won awards in Olympiads in various parts of the world were given their awards. Delivering a speech at the event, Noah said Indonesian students have earned many achievements in international Olympiads thanks to Turkish schools. “It is impossible not to appreciate what is being done at these schools. Thanks to the Turkish schools in Indonesia, which are linked to PASİAD, our students represent their country in the best way in international events. Our students achieve bigger success thanks to you.”

Addressing PASİAD Indonesia Branch Head Demir Timurtaş, Noah said although they face challenges, they should rest assured that it is Indonesia’s biggest duty to lend support to self-sacrificing people.

PASİAD’s Timurtaş said he was very flattered by the remarks of the Indonesian officials, which he added are due to the sincere efforts of the Anatolian people and the prayers of thousands of disaster-stricken Indonesians who were provided with sacrificial meat.

The first Contribution to Education Award was given to Dr. Anis Baswedan. Baswedan taught in villages where there were no teachers with a group of 51 volunteers, which included bank managers and company managers, for a month. This project, which was initiated by Baswedan, gave the country’s elite the opportunity to understand the situation of students deprived of education, prompting them to lend more support for education.

The second award was given to retired teacher Siti Fauzanah who gave lessons to needy students in her home despite her old age. She also provided her students with food and clothing. Thanks to her efforts, 15 Indonesian students won medals in international Olympiads.

The third prize was awarded to Jalal, who is the architect of a project as part of which 500 school managers went to Turkey and attended PASİAD’s education seminars. When they returned to their schools, these teachers began to apply the things they learned in the Turkish schools, such as Samanyolu and Fatih colleges, in Indonesian schools. After receiving his award, Jalal said the real recipients of this award should have been the Turkish teachers who went to PASİAD schools, because they worked under difficult circumstances away from their countries, and it was they who deserved this award.