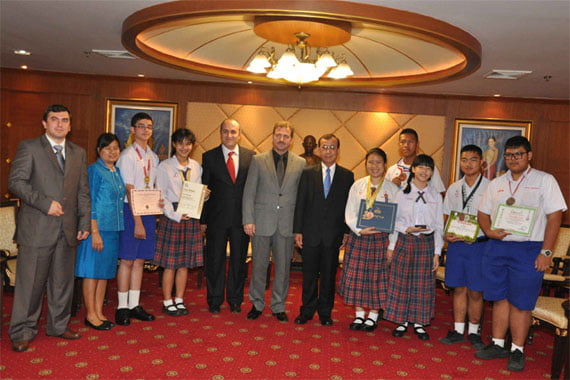 Winners at various International Science Olympiads from Turkish schools in Thailand paid a visit to Science and Technology Minister Peerapan Palusuk. The minister asked Turkish entrepreneurs to invest more in education sector in his country.

Turkish schools’ students in Thailand have been representing the country successfully at International Science Olympiads. Students from Chindamanee School, Siriwat Wittaya Bilingual School, Wichai Wittaya Bilingual School and Pan-Asia International School paid a goodwill visit to Science and Technology Minister Peerapan Palusuk. The minister applauded the students as he learnt about the medals they won in different countries.

Ufuk Civelek, the president of the Marmara Schools, which run the Turkish schools, briefed the minister about the schools and their future plans. The minister congratulated the students, as they were successful at Science Olympiads internationally. He confirmed his trust in the quality of the education at the Turkish Schools.

The minister also said Thailand is open to all kinds of foreign investment and Turkish investors should invest more in the education sector. The vice president of the Marmara Schools Ömer Faruk Karaçam, while speaking to the Cihan News Agency, underlined that the Turkish Schools were bestowed with the King’s Award multiple times because of their academic success and service to Thailand. The King’s Award is the most prestigious award in Thailand.

Islamic scholar and prominent Turkish figure Fethullah Gülen has called on his followers to pray for an end to the current tribulations in Syria and Palestine, according to Herkül.org, a website close to the movement. Gülen, who lives in self-imposed exile in Pennsylvania but remains an influential figure on Turkey’s political scene, said the problems […]