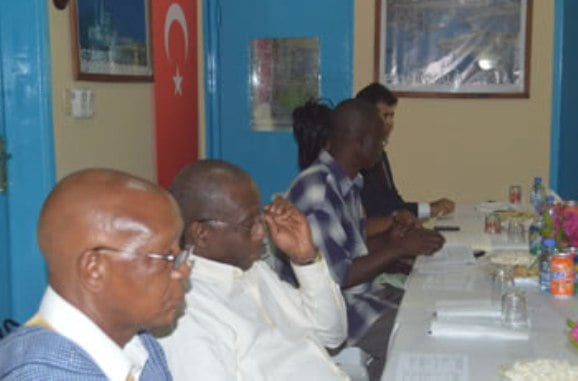 Liberia’s Minister of Gender and Development has described The Rainbow Intercultural Dialogue Center as a way forward as both Liberians and Turkish nationals continue to engage one another through dialogue.
Minister Julia Duncan Cassell said it is through peace, the people of Turkey decided to open up a relationship with the people of Liberia and through that relationship they have opened schools in the country and are carrying on construction of more schools.

“As we all know without peace, we were not to be where we are today and so this Intercultural Dialogue center in relation with the Gender and Development Ministry is a big step forward as our two countries continue to work together”.

Minister Cassell added that tolerance is the hallmark of life and praised officials of the Liberia Turkish Light International School for their support to the youth, who are the future leaders of Liberia.

The Deputy Minister of Research and Technical Services at the Gender Ministry Mrs. Annette Kiaw told the people of Turkey that she was glad to be present at the Rainbow Intercultural Dialogue Center as part of the friendship dinner.

“We are pleased to have insight about what this peace dialogue is all about and that we have seen the presentation and a little bit of insight so we are very pleased”, said Mr. Kiaw.

The Deputy Minister emphasized that peace is important and paid tribute to the Liberia Turkish Light International School for what she called the school professional way of teaching the future generation of Liberia about the danger of violence as they have seen in Liberia and other countries.

“I am pleased to say thank you on behalf of my husband and myself for the good work you have done and continue to do for our children and we wish to see more coming from Light International School”, the Deputy Minister added.

Dr. Michael Slaw on, the Director General, National Commission on Higher Education expressed satisfaction about the manner in which the people of Turkey continue to contribute to the development of Liberia.

Said Dr. Slawon: “We in Liberia are very pleased to have the Turkish Government representative here and I am glad that the Turkish team in Liberia is really interested in education. Not only in primary or secondary education, but up to university education, we hope they will provide more opportunities for students to study in Turkey”.

The Deputy Minister of Planning at the Education Ministry Dr. Khalipha Bility said the dialogue has shown all that humans deserve and that peace, love, happiness and kindness are all values that we all need if we are to live peacefully.

Dr. Bility acknowledged that the Rainbow Intellectual Dialogue is a true sign of tolerance among the people of Turkey and Liberia and said he hopes that the center will continue to invite people from all over the country to see for themselves the importance t of peace.

The Chief Executive Officer (CEO) and station Manager of Sky/TV FM Mr. Martin Brown told the organizers of the dialogue that he was happy to be among the distinguished personalities during such program where he was able to hear about the Father of the Rainbow Intercultural Dialogue Center Fethullah Gulen and the type of vision he emphasized about.

“Let me use this opportunity once again to pledge on behalf our media partners, our support for creating the kind of awareness platform that will further explain the vision of Mar. Gulen so that it can reach to a large group of people in the country”, Mr. Brown said.

The head of the National Office of the West African Examination Council Mr. J. Y Gayvolor Sr. expressed praises to the Turkish school for the professional manner in which they are helping to educate the future leaders of Liberia.

Mr. Gayvolor confirmed that the Turkish Light International School branch has been recognized as award winners and that the award will be given in Freetown, Sierra Leone during WAEC Annual Council meeting in March.

The WEC boss called on the Turkish people to help bring their people in Liberia to see as they have taken Liberians to Turkey and have seen the Turkish way of culture.

The General Manager of Liberia Turkish Light International School Ramazan Burak told invitees of the Education Ministry that they are in the country with the objective of helping to move the country forward.

Burak told the guest of the occasion that he was asked by the government of Turkey to come to Liberia and open school and at the time he never knew anything about Liberia except George Weah and ships that were using Liberian flags but he was very happy to come to Liberia to share with the people and help prepare the future generation of the country.

Said Burak: “We are here to help the people of Liberia to move the country forward and not so much of what we are going to get from the people but we want to prepare the children for a better future”.

The school General Manager narrated that currently there are 25 Liberian students in various universities in Turkey and 15 high schools and that they are all responding very well to their lessons.

Burak promised to make way for other Turkish people to visit Liberia to see for themselves some of the activities in Liberia.

The vice President of the school Madam Linda Dean extended thanks to the management of the Dialogue center for bringing people of different backgrounds together to talk about peace.

“Is an honor for all of us to be here tonight to talk about peace because peace is the essence of life and without peace we will not be where we are today” said Madam Dean.

The Principal of the school Hussein Baba emphasized that the aim of the founding father of the Rainbow Intellectual Dialogue Center is for the people of Turkey to come closer to their fellow men and interact with them.

“We opened school in Liberia in order to get closer to each other just as we have done and continue to do in 150 countries around the world that have Turkish schools.”

Principal Baba said the schools are made up of Muslims, Jews, Christians, Buddies but they are all together as one people.

Baba described the relationship between they as staff members of the school and students as very outstanding and said no parent has complain about performance of his or her child.

The Director of the Center Dialogue Center Ali Kaya disclosed that the Center was founded in 2013 with the mission to foster interfaith and intercultural dialogue, stimulate thinking and exchange of options on supporting and fostering democracy and peace all over the world and to provide a common platform for education and information exchange.

“The principal goal of Rainbow Intercultural Dialogue Center is to promote peace in the world and contribute to a peaceful coexistence of the adherents of different faiths, cultures, ethnicities and races”, the Director said.

Mr. Kaya mentioned that for that to be achieved, they believe that everyone must be respectful to the sanctity of human rights and democracy and use all means at hand to make this coexistence possible.

“To this end, we promote education exchange of information, opinions and expertise with a special focus on including as diverse a range of viewpoints as possible in our activities”, Mr. Kaya added.