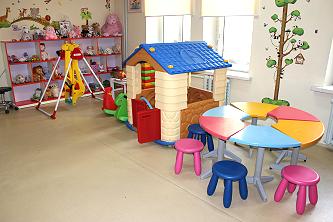 The schools’ students and parents alike had been raising money for a while. The students also donated their own books for the same cause. Besides the halls, the children at the hospital showed great enthusiasm for the donations of books and toys.

Elite Schools’ officials were presented with a certificate of appreciation at the event.

The chief physician at the hospital Dr. Chinzoright Davaa said, “We are thankful to Elite Schools for the reading halls, library and toys. This charity means a lot to our children who are coming particularly from rural areas. I would like to express my gratitude to you for that.”

The schools’ principal Mustafa Uguz said, “Here today, we set up reading halls at the nation’s largest pediatric hospital, which was made possible by the donations from our students and their families. We’ve inaugurated two of them today. We would like to thank, in this regard, our parents, students and parent-teacher association members in particular.”

Students from Turkish schools in the country dominated a ceremony in the Federation of Bosnia and Herzegovina in which the Ministry of Education rewards those students who are successful in national and International Olympiads.