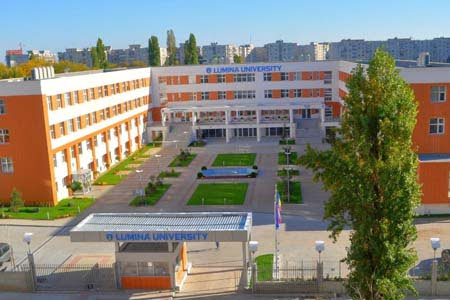 Lumina University, established in Bucharest by Turkish entrepreneurs with the goal of becoming the best in the region, has celebrated the start of its first academic year with a ceremony attended by Turkish and Romanian officials.

Neculai Ontanu, the mayor of Bucharest Sector 2, said Lumina University will be a model academic institution. Lumina education institutions have been operating in primary and secondary education in Romania since 1994. The expansion into tertiary education comes at a time when the educator is looking to make the university one of the world’s best.

Ayşe Sinirlioğlu, the ambassador of Turkey in Bucharest, also made a speech at the opening ceremony on Wednesday. She said relations between Turkey and Romania are excellent and the cooperation in education means that relationships between the countries’ peoples and cultures will develop much more. “I am sure that Lumina University will be a successful education institution,” she said.

Professor Recep İleri, who is head of the board of Lumina University, said the university aims to deliver high quality, visionary education and said it has started with a number of prestigious and fundamental departments, including engineering and political science. Finally, he thanked everyone who had contributed to making the university a reality.

Filip Stanciu, the president of Lumina University, gave an opening speech after the Turkish and Romanian national anthems were sung and said the university was investing in professionalism. Stanciu also stressed that Lumina schools have proved their quality through their secondary education institutions. Stanciu said that Lumina University had a 1,000-student capacity and complied with EU standards, while emphasizing that Turkish and Romanian relations would develop even further because of the institution. Stanciu remarked that Lumina is a unique university in Romania as it has 16 laboratories and a research center.

Varujan Pambuccian, the head of the Romanian parliament’s minorities group, said he was paying attention to the developments of Lumina institutions and he hoped that the university would succeed, as the Lumina secondary schools have done. The university is home to student clubs, sports activities, workshops and exhibitions. The engineering, political science and economics departments are now open.