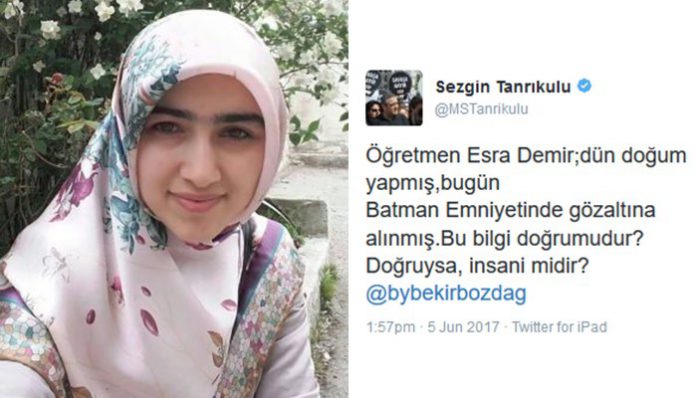 According to the report, Demir gave birth at Batman Dünya Hospital on Sunday. Police waiting at the hospital gate took her into custody as she left the hospital on Monday.

This is not the first detention of a woman immediately after delivery.

Nazlı N. Mert, who was detained shortly after giving birth and taken to a police station with her newborn baby, was released over the weekend on judicial probation due to growing public outrage over the incident, according to local media.

Mert was taken into custody as part of a post-coup witch-hunt targeting alleged members of the Gülen movement, the Stockholm Center for Freedom (SCF) had reported.

The husband of Mert, who gave birth to a baby in a caesarean procedure, had previously been arrested and imprisoned over his alleged ties to the Gülen movement.

Turkish police on Friday also detained Elif Aslaner, a religious education teacher who gave birth to a baby on Wednesday at a private hospital in Bursa, due to her alleged links to the faith-based Gülen movement.

According to a statement from her husband, who spoke to the Aktifhaber news website, police teams arrived at the hospital on Wednesday evening to detain Aslaner; however, the woman’s doctor said she should be kept under observation for at least 48 hours because of possible complications.

Aslaner’s husband said his wife had preeclampsia and suffered from convulsions when she gave birth to her first baby and remained in a coma for two days. The husband said there was a risk of the same complications recurring.

The husband also said their house was raided and searched by the police at a time when they were not at home while his wife was still pregnant. He said his wife did not want to surrender to the police because she was afraid of being arrested, like some other women who were arrested while they were pregnant or shortly after giving birth.

According to Aktifhaber, Aslaner was detained on Friday morning as she was being discharged from the hospital with her newborn baby.

In May, Aysun Aydemir, an English teacher who gave birth to a baby in a caesarean procedure, was detained at the hospital and subsequently arrested by a court and put in pretrial detention with a three-day-old baby in Zonguldak province as part of the witch-hunt targeting the Gülen movement.

In late January, Fadime Günay, who gave birth to a baby, was detained by police at Antalya’s Alanya Başkent Hospital as part of the same witch-hunt.

In early January, Ş.A., a former private school teacher and mother of a week-old premature infant, was taken into police custody over links to the Gülen movement while she was on her way to the hospital to feed the baby.

Turkey survived a military coup attempt on July 15 that killed over 240 people. Immediately after the putsch, the Justice and Development Party (AKP) government along with Turkey’s President Recep Tayyip Erdoğan pinned the blame on the Gülen movement.