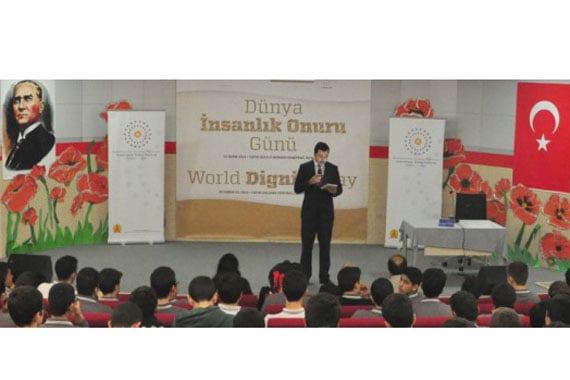 Within the context of the festivities that were kicked off at 11:00 am at the local time of 50 countries including Turkey, events were held in the central campus of Fatih College in Istanbul and in Çankaya campus of Nevin Gökçek Girls’ High Schools in Ankara.

Global Dignity was established to promote “Human Dignity and Justice for All” inspired from the United Nations Universal Declaration of Human Rights and marks the Global Dignity Day on the third Wednesday of October every year since 2008 with participation of young people from around the world.

This year the most inspirational and memorable event for me was the PII’s iftar, not only because of Imam Shareef’s moving speech but also because I witnessed a wonderful experiment. A great friend of mine, Bergen County Sheriff Michael Saudino, was there, too. He has been attending the PII’s iftar dinners for three years. He decided to fast that day for the first time in his life to experience what fasting is really like in the Islamic way.