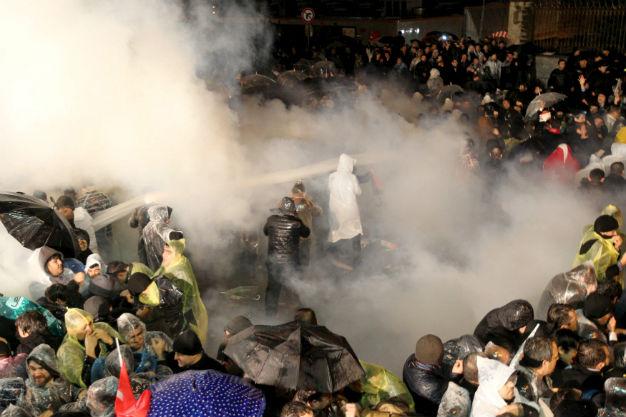 Riot police use tear gas to disperse protesting employees and supporters of Zaman newspaper in front of its headquarters in Istanbul, Turkey, early March 5, 2016. REUTERS photo

In the last six months of the year, the government carried out mass arrests of journalists, closed multiple media outlets, and jailed elected opposition politicians. It dismissed or detained without due process over 100,000 civil servants including teachers, judges and prosecutors, suspended hundreds of nongovernmental groups, and consolidated government control over the courts.

“Instead of building on the cross-party unity opposed to the coup to strengthen democracy, Turkey’s government has opted for a ruthless crackdown on critics and opponents,” said Hugh Williamson, Europe and Central Asia director at Human Rights Watch. “With hundreds of thousands of people dismissed or detained without due process, an independent media silenced and Kurdish opposition members of parliament in jail, Turkey has been plunged into its worst crisis in a generation.”

In the 687-page World Report, its 27th edition, Human Rights Watch reviews human rights practices in more than 90 countries. In his introductory essay, Executive Director Kenneth Roth writes that a new generation of authoritarian populists seeks to overturn the concept of human rights protections, treating rights as an impediment to the majority will. For those who feel left behind by the global economy and increasingly fear violent crime, civil society groups, the media, and the public have key roles to play in reaffirming the values on which rights-respecting democracy has been built.

The attempted coup left at least 241 citizens and government law enforcement officers dead. The coup plotters used fighter jets to bomb Turkey’s parliament. In the aftermath, the government declared a state of emergency, jailed thousands of soldiers, and embarked on a wholesale purge of public officials, police, teachers, judges and prosecutors. The government misused terrorism laws against followers of the US-based cleric Fethullah Gülen, whom the government accuses of masterminding the July coup attempt, The mass arrests and removal of safeguards against detainee abuse led to rising reports of torture and other ill-treatment in custody.

The escalating conflict in the predominantly Kurdish southeast of Turkey during 2016 also led to serious and widespread human rights violations in the region followed by a harsh crackdown on the Kurdish political movement and the jailing of thousands of Kurdish activists, among them democratically elected members of parliament and mayors. In 2016 repeated bombings in Turkey’s major cities by individuals with alleged affiliations to the extremist group ISIS or the Kurdish militant group TAK led to hundreds of deaths.

Turkey also continued to host 2.7 million refugees from Syria while entering an agreement with the EU to accept forcible returns of refugees who had crossed into Greece. Reports also persisted throughout the year of Turkish border guards pushing back refugees at the Syrian border and shooting at several refugees seeking to cross to safety in Turkey.