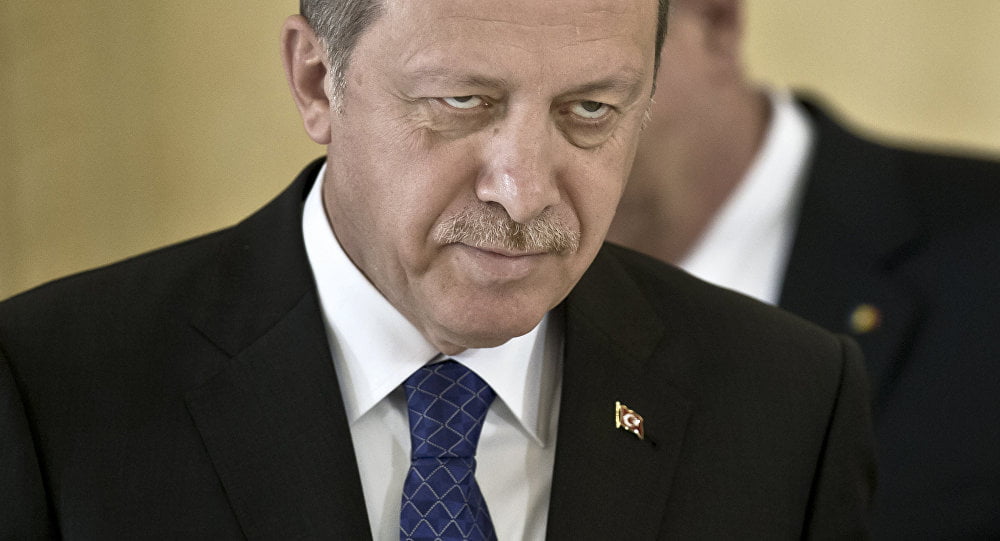 After the Turkish President Recep Tayyip Erdoğan accused his former ally and an avowedly moderate Islamic scholar Fethullah Gülen of plotting the failed coup, the Turkish government sought his extradition from the US. But surprisingly, the US has now confirmed that Turkey has made a formal request for the extradition and has specified that it is not linked to the failed coup. The Deputy State Department spokesperson Mark Toner said, “We can now confirm that Turkey has requested the extradition of Gülen. But I wouldn’t characterise the request as relating to the coup attempt.”

Initially, Erdoğan had said that “Sooner or later America will have to make a choice. Either Fethullah Gülen’s terror organisations, as the Turkish regime terms it, or the democratic country Turkey.” But so far, the US has refused to hand over Gülen, saying Turkey would need to provide “evidence, not allegations” against him, in order to have him extradited. Recently, Washington has sent investigation teams to obtain an ‘evidence-based extradition request’.

But Erdoğan wants Gülen’s immediate extradition. The latest ‘formal request of extradition’ from Ankara for the US-based modernist Islamic scholar is clearly an escape from the scrutiny that Erdoğan was asked to carry out. One wonders why the extradition is now delinked from the July coup the Turkish regime blamed Gülen for.

Gülen, who has lived in a reclusive self-exile in the US since 1999, repeatedly stated that he is ready for an international investigation into the coup and if found guilty on the basis of irrefutable evidence, he would willingly submit to the judiciary.

Gülen has also written several articles in the international media, strongly denying any involvement in the failed putsch. He writes in one of his opinion pieces:

“Twenty minutes after the coup attempt, even before the real actors were known, President Erdoğan hastily blamed me… It is troubling that an accusation was issued without waiting for the event’s details and the perpetrators’ motives to emerge… As someone who has suffered through four coups in the last 50 years, it is especially insulting to be associated with a coup attempt. I categorically reject such accusations… Even though I distanced myself from the idea of political Islam, I praised the democratic reforms undertaken by Mr Erdoğan and AKP leaders during their first term in power… throughout my life, I have stood against military coups and intervention in domestic politics.”

But despite these categorical and unequivocal clarifications, the Turkish government did not give up blaming Gülen. It has rather declared all the educational, humanitarian and even interfaith dialogue NGOs inspired by Fethullah Gulen, as “terrorist organisations” (FETO).

Recently, Turkish foreign minister Mevlüt Çavuşoğlu visited India and claimed that Fethullah Gülen’s Hizmet movement is a “global terrorist outfit which has also infiltrated India.” Cavusoglu also accused the Hizmet of being ‘a secretive transnational criminal network operating in India through schools and associations’. Prior to this, Turkish Ambassador to India, Burak Akçapar, also confirmed that his country has asked India to shut down activities and institutions run by the Gülenists. However, Turkey’s tremendous urge for Gülenists’ extradition clamping down their activities has put India into a dilemma.

In this backdrop, The Indian Express published a detailed report titled, “FETO in India? All you need to know about the organisation”. It explores the activities of the organisations inspired by Fethullah Gülen working across the world, which are now branded as “FETO” by the Turkish government. The report says:

“It is a transnational Islamic civic society movement inspired by Gülen’s teachings… It has attracted supporters in Central Asia and other parts of the world and has been characterised as a “moderate blend of Islam… Within Turkey, FETO keeps its distance from established Islamic political parties, but is active in areas like education, interfaith dialogue, civic opportunities, humanitarian aid, media, finance, and health. FETO also runs many charity and humanitarian aid organisations including the famous Istanbul-based Kimse Yok Mu Association (KYM). KYM which campaigns to help those in need in different parts of the world. The Turkish government has accused FETO of being involved in the ongoing Ergenekon investigation. However, its supporters call it “a pretext” by the government “to neutralize dissidents” in Turkey”.

Notably, Gülen has also been proactively engaged in a serious brainstorming in his effort to prepare a counter-narrative against the political Islamist ideology. He calls for replacing the extremist, intolerant, retrogressive and chauvinistic precepts of the hardcore Islamists with universally applicable, progressive and egalitarian values. He has redefined exclusivist Islamic edicts coined in the medieval era which are instrumental today for the jihadist recruiters harbouring an exclusivist worldview of ‘us’ versus ‘them’. For instance, the medieval-minded Islamists divided the world into two sharply distinguished parts — Islamic caliphate vs. un-Islamic countries, including the democratic, republican, communist and all nation states. They coined the terminologies like “Dar al-Kufr” (land of infidelity) andDar al-Islam (land of belief) which are instrumental for the present-day jihadists and are detrimental to the survival of the democrats in the world.

But Fethullah Gülen, as a sagacious modernist Islamic scholar, urges to replace all such obscurantist and dichotomous terms with the spiritual Islamic concepts. In this effort, he replaced the doctrine of Dar al-Islam and Dar al-Kufr with Dar ul-Hizmah (abode of service) and named his movement as “Hizmet”. He stressed Prophet’s mystical tradition that says that “the entire mankind is as one family of God (ayal al-Allah)”. And this is the key concept behind the the Hizmet movement which is inspired by Gülen’s spiritually-inclined progressive interpretation of Islam. 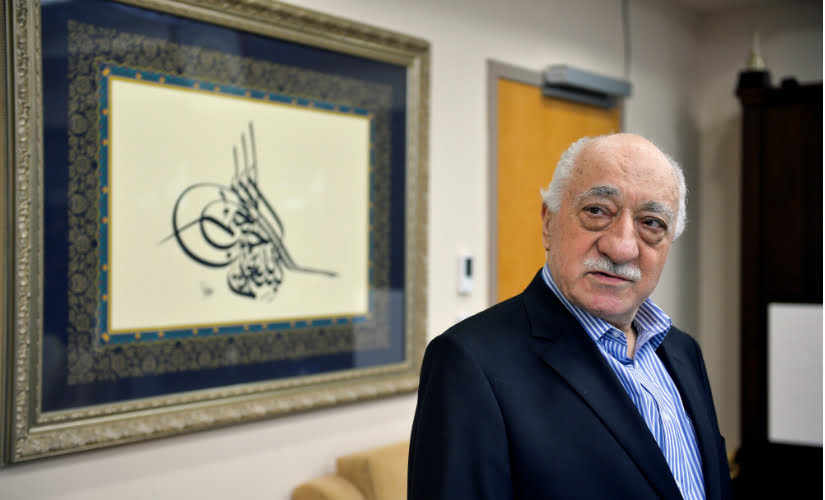 A critical analysis of Gülen’s rebuttals of the extremist Islamist doctrines reveals that his moderate description of Islam, which the Hizmet espouses and enhances, is an antidote to the radical Islamists’ theological underpinnings behind the creation of a worldwide ‘Islamic  caliphate’. No wonder then, Gülen is now facing an unjust onslaught of Erdoğan, the political Islamist president of Turkey who appears to create an Islamic caliphate of his own, something that does not go down well with the advocate of religious pluralism living in self-exile in the US.

The current Turkish regime is hell-bent on crushing down Hizmet’s worldwide advocacy for a pluralistic, dialogic and progressive Islam; a sane voice which is abysmally minimal in the Muslim community the world over. More distressing is the widespread united support of the world’s political Islamist leaders like Al-Qaradawi for the Turkish President Erdoğan extolled as “ammer-ul-moimineen” (chief of the believers) and a “divinely-appointed leader of the Islamic ummah who is backed by God, the angels and the entire ulema fraternity”.

This religious zeal for the endorsement of Erdoğan’s ‘Islamic caliphate’ also echoed in India in the garb of democracy’s victory in the failed coup attempt. Two days after the failed putsch in Turkey, an Indian Islamist leader and cleric of Darul Uloom Nadwa, Maulana Salman Hussaini Nadvi wrote a letter on 17 July praising Erdoğan and denouncing Fethullah Gülen as the mastermind of the Turkey coup.

It should be recalled that Maulana Salman Hussaini Nadvi was the first Indian cleric who also wrote letter of appreciation and allegiance to Abu Bakr al-Baghdadi, head of the Islamic State militant group, when he announced his self-imposed Islamic caliphate in Raqqa, Syria. However, he later backed out of his support when faced with a strong international reaction against him.

One thing is evident from the political Islamists’ zealous support for Erdoğan and the ideology of “Erdoğanism”: their ulterior motive is to back the emerging political Islamist leader in Turkey to create a future Islamic caliphate, not to sustain democracy in the country.

At a time when the Turkish government has urged India to ban the Hizmet calling it a ‘terrorist outfit’ and ‘a secretive transnational criminal network’, one should be amazed at the naivety of the Indian government if it falls prey to this blatant falsification. India’s External Affairs Ministry spokesperson Vikas Swarup has said, “The Indian side is sensitive to Turkish concerns and Indian security agencies are looking into Ankara’s demand for closure of associations connected with FETO which were carrying out illegal activities”, as per the news reports.

In 2005, the Hizmet activists in India, also known as the Gülenists, established “Indialogue Foundation”, which is an action-oriented research foundation operating in several parts of the country. The foundation was conceived by a group of Turkish and Indian people. The official website of the Indialogue Foundation clearly states its prime concerns: “to champion proactive studies, to pioneer international, intercultural and interfaith dialogue initiatives and to promote universal values as love, respect, harmony, co-existence, cooperation, care and peace”.

Indian scholars and students of all faith backgrounds, along with the Turkish activists of the Hizmet, are also engaged in dialogue activism at the Indialogue Foundation ushering in a culture of dialogue and co-existence among scholars of all faith traditions with major focus on shared spiritual values.

Indian government must take an account of all this ideological discourse in a deeper way, since Turkey has urged India, like the US, to shut down all the Hizmet activities. It should not overlook Gülen’s democratic and secular ideas, his counter-terror narrative as well as the current Turkish President’s inclination towards the political Islamists’ ambition of an Islamic caliphate. Only then the country can take a right democratic course of action in this respect.

The author is a scholar of Comparative Religion, Classical Arabic and Islamic sciences, cultural analyst and researcher in Media and Communication Studies. He tweets at @GRDehlvi. Email: [email protected]