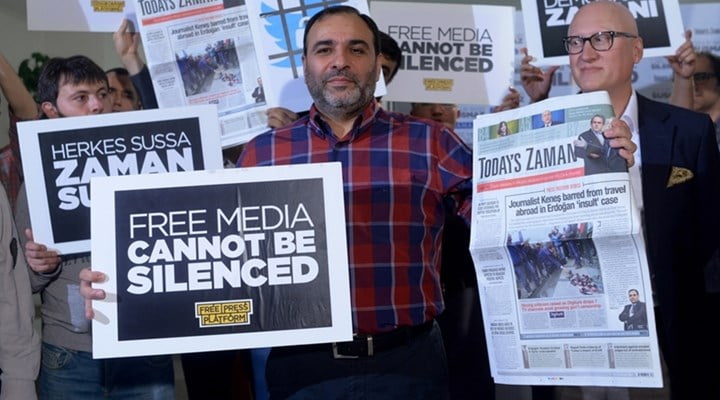 Journalist Keneş, who heads a newspaper critical of the government, was taken from his office late on Friday and arrested on charges of “insulting” President Recep Tayyip Erdoğan in a series of tweets that the journalist said was simply him expressing a critical opinion.

“The Committee to Protect Journalists denounces today’s arrest in Istanbul of Bülent Keneş, the editor-in-chief of the English-language daily newspaper Today’s Zaman,” the group said in a statement late on Friday.

“The treatment of Turkish editors and journalists is becoming an increasing cause for alarm. If you run for public office — with all the power you hold over citizens — it is only right that you should expect criticism,” Alan Rusbridger, former editor-in-chief of The Guardian and board member of the CPJ, told Sunday’s Zaman in comments on Keneş’s arrest.

“That criticism might take the form of reasoned argument, or even mockery. Too bad. If you don’t like criticism you shouldn’t go into politics. Turkey’s attack on journalists for doing their jobs is a national embarrassment,” he said regarding the government’s increasing intolerance of critical voices.

The US State Department also expressed concerns over the arrest of Keneş and called on Turkey to respect media freedoms.

Turkey has been the subject of harsh criticism over its poor treatment of journalists, with hundreds of critical reporters being questioned over their tweets or articles. President Erdoğan has been exploiting an ambiguously worded law on insulting the president to crack down on critical journalists, the CPJ warned earlier.

“Not a day passes by without a prosecution, arrest, attack, or obstruction of indePENdent or opposition voices in Turkey. Such a record does not befit a modern democracy that aspires to enter the European Union,” she added.

Leading rights advocate Freedom House has said it is “extremely concerned” about the arrest of Today’s Zaman editor-in-chief, describing the latest salvo on the critical media as “relentless pressure.”

“We are extremely concerned about the case of Bulent Kenes as another example of the relentless pressure being put on the media in advance of the elections in three weeks,” Freedom House told Sunday’s Zaman in a statement.

Freedom House said on Friday that the media atmosphere is an important part of a free and fair election, and that “we are concerned that the government is trying to suppress dissent for political advantage.”

“Insult laws continue to be used by the Turkish authorities to stifle dissent, targeting journalists and others expressing critical opinions,” he said.

“Insult prosecutions should never result in pre-trial detention or imprisonment on conviction. Doing so violates European and international human rights standards,” he added.

Critics often say that prosecutors tended to broadly interpret articles in criminal law and about freedom of expression, often at the expense of liberties.

“This is the latest in what is clearly now a campaign against the press in Turkey. English PEN is extremely concerned at the extent to which the press is being targeted and urges President Erdogan to allow the media to do their job without fear of intimidation or harassment,” English PEN Director Jo Glenville said in a written statement.

The targeting of journalists elicited sharp criticism from representatives of rights groups and organizations.

Jonathan Fryer, writer and broadcaster and vice president of the Liberal International British Group, said in a statement: “In a mature democracy, politicians — no matter how senior — must expect to be the subject of critical comments in some media. It is the job of journalists to express opinions, without fear or favour.”

“The harassment of members of the media in Turkey has become alarmingly systematic, clearly with the intention of suppressing free expression,” he said. “The timing of the latest incidents, including the removal of Bulent Keneş from his office, is particularly unfortunate as President Erdogan has just been in Brussels where the EU expressed its readiness to reactivate the accession process to the European Union for Turkey, but that is never going to happen so long as reputable media outlets are prevented from carrying out their work freely,” he said regarding Turkish authorities’ crackdown on media outlets.

“As a longstanding friend of Turkey, I find all this bitterly disappointing,” Fryer concluded in the statement.

Thomas Bruning, the secretary-general of the Dutch Association of Journalists (NVJ), also reacted to Keneş’s arrest, saying that Turkey’s democracy is losing momentum. Noting that the witch-hunt against journalists has never ceased, Bruning said the government is eliminating people’s right to information. “Journalists are prevented from doing their jobs properly.”