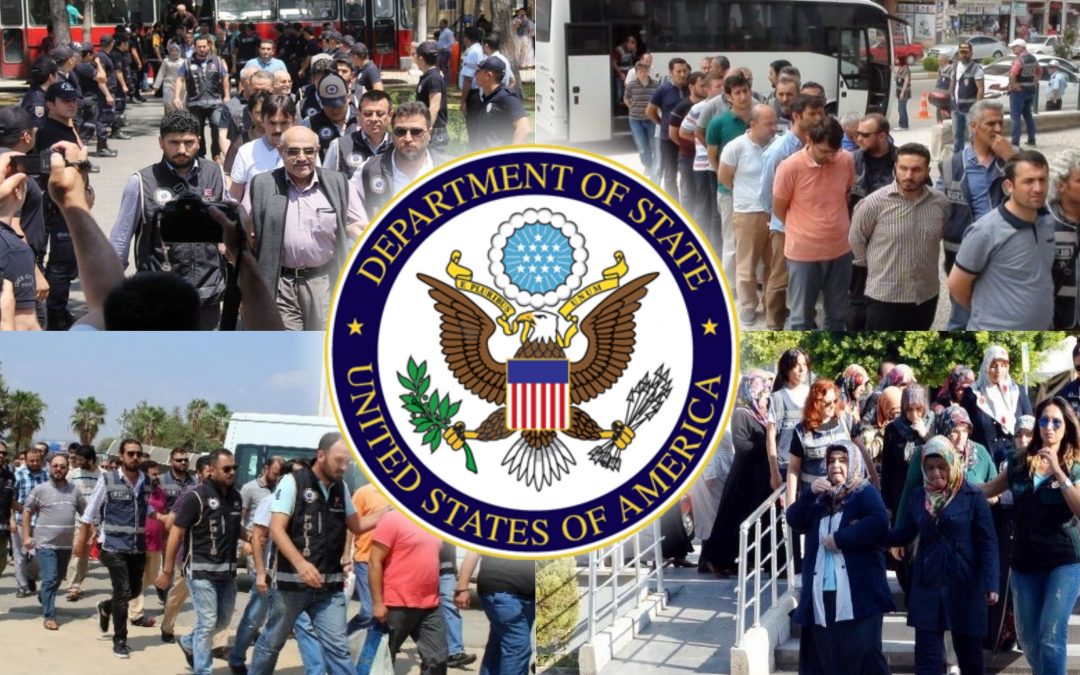 The report on Turkey underlined a large number of purges in state jobs, detentions, arrests, jailed journalists and violation of human rights and freedoms while stating that the Turkish government took limited steps in investigating, punishing and drafting indictments against security forces accused of human rights violations.

According to the report, the AKP government cancelled or refused to issue passports for the minor children of Gülen followers who fled a government witch-hunt that forced family separation.

According to the report, ruling Justice and Development Party (AKP) government issued decrees under a state of emergency that restricted suspects’ access to legal assistance, allowed suspects to be held without charge up to 30 days and permitted authorities to seize or freeze the assets of suspended or fired civil servants or their family members in some cases.

It also mentioned minority groups, including Alevis, Christians, and lesbian, gay, bisexual, transgender, intersex (LGBTI) individuals, continued to face threats, discrimination and violence and reported that the government took insufficient steps to protect them. According to the report, the pro-government media used anti-LGBTI, anti-Armenian, anti-Alevi and anti-Semitic rhetoric in Turkey.

The report also emphasized that at least 140 journalists were arrested after July 15, 2016 mainly over their links to the Gülen movement and the outlawed Kurdistan Workers’ Party (PKK).

“The government used its authorities under the state of emergency to close more than 195 media outlets critical of the government as of mid-December. Authorities linked most to either the Gulen movement or PKK. The government issued arrest warrants for more than 200 journalists and blocked dozens of online news media sites,” the report stated.

“After the coup attempt, 29 Gulen-affiliated publishing companies were closed, and schools avoided the titles they published although the titles were not technically criminalized,” the US human rights report on Turkey also said.

Underlining that primary and higher education in Turkey was affected by government purges in the Ministry of National Education, the report noted that tens of thousands of teachers, academics and staff were dismissed.

“A decree issued on July 27 closed 15 universities affecting 64,533 students and 2,808 academics. As of December some sources estimated as many as 6,000 academics had been suspended or fired on allegations of terror links,” it said.

The report also referred to a government witch-hunt against the Gülen movement, stating that “the government targeted family members [of Gülen followers] to exert pressure on some wanted suspects.”

According to the report, the AKP government cancelled or refused to issue passports for the minor children of Gülen followers who fled a government witch-hunt that forced family separation.

Providing few specific examples of the massive government crackdown on the Gülen movement, US State Department report also referred to the cases of former Zaman columnist and Yarına Bakış editor-in-chief Bülent Korucu, whose wife has been under arrest since August, and famous soccer player Hakan Şükür, whose 75-year-old father Sermet Şükür was detained in August and released at the end of November.

To describe the degree of the purges in state institutions, the report mentioned a measure taken by the Ministry of National Education to rewrite 58 textbooks after the failed coup attempt in an effort to remove “subliminal messages” allegedly inserted by the Gülen movement into the books.

“Primary, secondary, high schools, and universities became increasingly cautious about the books they allowed students to read,” the report said.

According to the report, the government fired more than 3,000 members of the judiciary, which created an atmosphere of fear that further limited judicial independence and complicated or delayed court proceedings.

On the Kurdish issue, the report indicated that the Turkish security forces failed to take adequate actions and measures to protect civilians while combatting the PKK in southeastern provinces.

“Hundreds of thousands of residents of the Southeast were forced to flee their homes and most remained internally displaced at year’s end. Upwards of 200 civilians were killed in the fighting. Human rights groups reported that security forces killed and injured persons who attempted to cross illegally from Syria into Turkey and documented reports of torture and abuse of prisoners following the coup attempt,” the State Department report pointed.

In addition, the report stated that prisons in Turkey are overcrowded due to the influx of tens of thousands of new prisoners after the coup attempt.

The report also added that the worst forms of child labor, especially among the refugee population, persisted in the country.

According to the report, the pro-government media used anti-LGBTI, anti-Armenian, anti-Alevi and anti-Semitic rhetoric in Turkey.

Meanwhile, human rights groups criticized the low profile release of the country reports in Washington under the new US administration, which contrasted with long-standing State Department traditions.