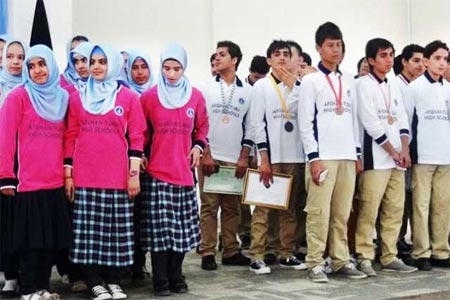 Mr. Faruk Vardak, the Minister of Education of Afghanistan, presented the awards to the students. Mr. Basat Ozturk, Turkey’s Ambassador to Afghanistan, and Mr. Numan Erdogan, the director of the Afghan Turkish Schools and Afghan bureaucrats attended the award ceremony.

Mr. Faruk Vardak, the Minister of Education, said at the award ceremony that “Some other countries in the world also tried to help Afghanistan but the contribution and the support of Turkish schools is greater than all. We will never forget this support because these schools taught us how to fish, instead of giving fish.”

Turkey’s Ambassador Mr. Ozturk stated that he was so happy and proud of Afghan-Turkish Schools’ success.

Mr. Numan Erdogan, the director of the Afghan Turkish Schools said that Turkish Afghan friendship had a history of more than a thousand year and that they would do everything to protect and further this friendship.

Mr. Vardak, Afghan Minister of Education, also said that the greatest medal of his ministry would be given to Afghan Turkish Schools.