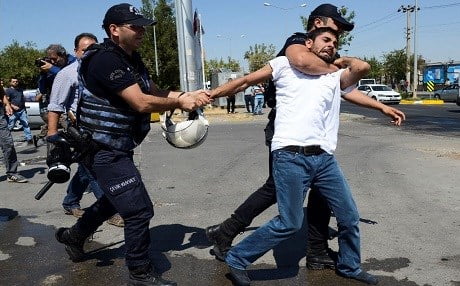 Turkish police detain a teacher during a protest in Diyarbakir in September. Photo: Ilyas Akengin/AFP

Persons imprisoned in the crackdown after the attempted coup of July 15 and persons alleged to have links with the outlawed Kurdistan Workers Party (PKK) detailed incidents of ill-treatment in Turkish prisons to the United Nations’ special rapporteur on torture.

“[T]orture and other forms of ill-treatment were widespread,” in the immediate aftermath of the attempted coup, stated Nils Melzer in a preliminary report on torture in Turkey published on Friday.

Melzer visited Turkey from November 27 to December 2 and investigated several prisons, where he was able to hold private meetings with inmates, including those alleged to have ties to the Gulen movement, which Ankara blames for the coup, and those detained or convicted in relation to the ongoing security forces’ operation in the Kurdish southeast.

He was also accompanied by a forensic expert who conducted medical examinations and found evidence that some inmates had been tortured.

While noting that Turkey has legislation to safeguard against torture and ill-treatment, Melzer described a “disconnect between policy and reality.

In the sweeping security measures and emergency legislation enacted after the coup, a “general sense of intimidation and distrust” developed in the population that prevented inmates, families, doctors, and lawyers from taking any action that could be deemed as critical of the government, Melzer noted. People feared retaliation from the security forces if they reported the ill-treatment.

As a consequence, incidents of torture and abuse have gone unreported.

While reports of torture and ill-treatment spiked in the first days and weeks after the attempted coup, Melzer noted that the ill-treatment of alleged coup plotters “appears to have ceased.”

In the Kurdish southeast, where the conflict between Turkish forces and the PKK was reignited in July 2015, “my team and I received numerous troubling testimonies of torture and other forms of ill-treatment of both male and female inmates suspected to be members or sympathizers of the PKK.”

Melzer noted that a law granting immunity to counter-terrorism forces has made it “difficult, if not impossible” to investigate reports of abuse, a situation compounded by the extraordinary measures brought in under the state of emergency imposed after the attempted coup.

Acknowledging the challenge the Turkish government faces given the volatile security situation in Turkey after the coup, Melzer stressed that torture and ill-treatment are never justified and urged Ankara to take a public stand against torture and investigate all allegations of ill-treatment.

In October, the rights monitor Human Rights Watch reported on 13 cases of alleged abuse of people arrested after the coup.

“By removing safeguards against torture, the Turkish government effectively wrote a blank cheque to law enforcement agencies to torture and mistreat detainees as they like,” the organization’s Europe and Central Asia director Hugh Williamson said.

Two days before Human Rights Watch’s report was released, Turkey’s Justice Minister Bekir Bozdag insisted “there is no bad treatment or torture” in Turkey’s prisons, AFP reported at the time.