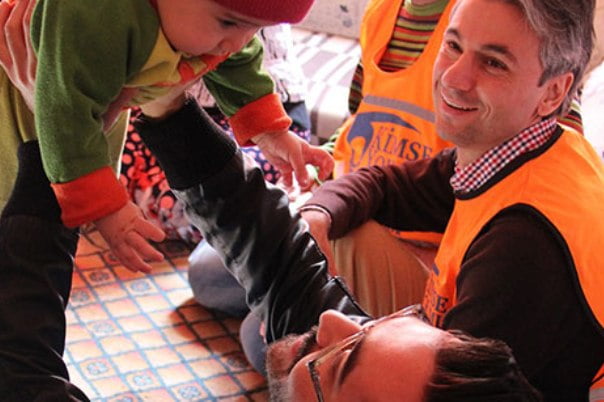 İSTANBUL
The Turkish aid organization Kimse Yok Mu is conducting a joint project with the Office of the United Nations High Commissioner for Refugees (UNHCR) to provide monetary assistance to Syrian refugees in Turkey in an effort to “normalize” their lives as much as possible.

Starting the project in December with the creation of a database of Syrians in Kilis, Reyhanlı, Yayladağı, Gaziantep and Nizip, where large numbers of Syrians live, Kimse Yok Mu chose the families most in need of aid with the help of almost 100 volunteers from the regions. The families were selected based on their socioeconomic situation.

Metin says that in accordance with the other aim of the project, which is to provide emotional support to Syrians as well, Kimse Yok Mu staff and volunteers visited each family to personally deliver pre-paid debit cards to the refugees. “Rather than only handing out debit cards, our goal was to minimize the negative impact of the war on families,” Metin pointed out. According to him, it is important to help Syrian refugees stand on their own feet and prepare them for a normal life.

Kimse Yok Mu completed its database in less than three weeks, before the intense winter conditions make life even harder for Syrians in the regions.

“We held talks with the UNHCR even before the project, but during this process they were able to learn more about the aid work of Kimse Yok Mu, which resulted in very successful outcomes,” Metin said in response to a question on their cooperation with the UNHCR. He notes that Kimse Yok Mu is already known by many international organizations thanks to its global presence and that they are able to have dialogue with many similar organizations because of this.

In response to a question on why they are delivering monetary assistance in the form of debit cards, Metin says their effort is aimed at “normalizing” the lives of Syrians and helping them stand on their own feet after their lives were torn apart by war. “We provide them the opportunity to buy whatever they want, wherever they want — just like the rest of us,” Metin points out.

All the funds for the project were provided by the UNHCR and via pledged donations via SMS as in other Kimse Yok Mu projects. “Only those who live outside of refugee camps are able to take advantage of this project,” says Metin.

During the two-month-long project, every member of each family will be given TL 100. The project is conducted in the abovementioned provinces because these areas have the largest Syrian populations outside refugee camps.

In addition, according to figures provided by Metin, since the beginning of the civil war in Syria, Kimse Yok Mu has helped approximately 100,000 refugees across Turkey in the amount of TL 50 million.

“In addition to our permanent food aid, we also help Syrians in terms of providing school supplies to the education centers they attend and assistance with rent or electric and water bills,” says Metin, adding that they also go out and deliver blankets and tents to refugees.

According to UN figures, approximately 10 million people have been affected by the war in Syria, Metin says. About 6.5 million of them have been subjected to forced displacement within Syria while the remainder have had to flee to countries such as Jordan, Lebanon and Turkey. According to estimates, Turkey hosts almost 1 million Syrians, the majority of whom are now in big cities such as İstanbul, İzmir and Şanlıurfa. Metin says they are able to provide assistance to refugees effectively through their branches across Turkey.

Responding to a question on whether they provide assistance to Syrians in Syria, Metin says they decided not to go to Syria based on a decision by the Kimse Yok Mu board. However, he says they deliver aid to the Turkish Red Crescent (Kızılay) on the condition that the aid is delivered at “zero point,” at the border.

According to Metin, volunteers play a significant role in the organization, in addition to their official staff. “Volunteers are the ones who help us gain the most accurate data about the people who are in need in the regions they live,” Metin says, expressing his appreciation for their contribution to Kimse Yok Mu campaigns.

Designated a nongovernmental organization in March 2004, Kimse Yok Mu started its work following a devastating earthquake in Turkey in August 1999 and adopted its name (Is Anyone There?) from the cries of people who remained trapped under the rubble.

Kimse Yok Mu, which now reaches out to different regions of the world affected by catastrophes, is recognized by the Republic of Turkey as an association that works for the “public interest.” The status was accorded by Cabinet decree No. 2006-9982 on Jan. 19, 2006, with the approval of the president at the time.

A new hospital, 33-bed capacity hospital in service of 300 daily, jointly by South East International Health Federation (GUSAF), Uganda Nile Foundation and Kimse Yok Mu, is currently under construction in Uganda. A conference titled “Multifaceted Human Nature and Its Relation with Health” was held to commemorate Medicine Festival on March 14 with various health […]