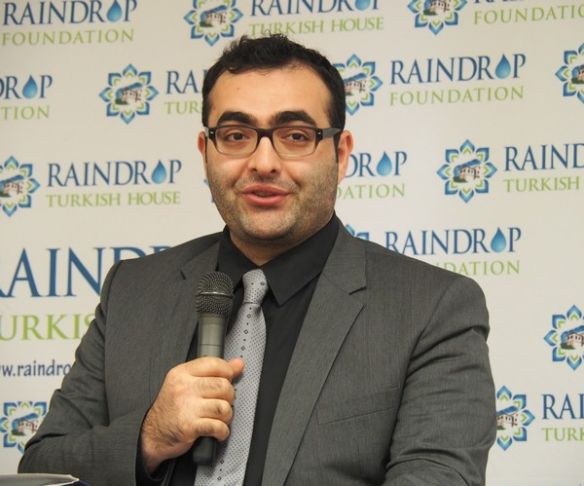 NORMAN, Okla. – Mahir Zeynalov, a Turkish journalist and analyst in Washington, D.C., the first journalist to be deported by Recep Tayyip Erdogan, the president of Turkey in 2014, talked about the recent evolutions in Turkey since the failed coup attempt in 2016 on Feb. 10 at the Raindrop Turkish House in Oklahoma City.

Zeynalov reminded the attendees that Erdogan also was arrested a couple of decades ago. That eventually helped him to become famous and won him the elections five years later. But it didn’t stop Erdogan to use the same law for justifying the arrest of Zeynalov in 2014. Zeynalov ironically added his deportation from Turkey helped him to become a famous journalist around the world.

He said there are still thousands of journalists (besides, academics, teachers, officers, and others) imprisoned in Turkey, sometimes persecuted or forced to sign false testaments of their involvement in the last failed coup.

He added that over 130 media outlets have closed in the last six months, forcing other media outlets to become more pro-government if they want to survive.

“Turkey has the most educated incarcerated population in the world,” he said.

“Is the Turkish government trying to hide something?” Zeynalov wondered, adding civil liberties and democracy are part of the past in Turkey. “Ten years ago Turkey had a vibrant society.”

Zeynalov said Erdogan is still very popular in Turkey and believes Turkish people will start to question him only if Turkey’s economy is going down.

“There is this misconception in the West that Erdogan is not popular, no, he is widely popular in the country,” Zeynalov said.

Concerning Turkey’s international relations, Zeynalov said the U.S. helps the Kurdish in Syria and the refusal to extradite Fethullah Gülen, a Turkish preacher, former imam, writer, and political figure, to Turkey has pushed Erdogan to be closer to Russia.

The arrival of Donald Trump at the White House could make a difference. He added there is no official proof that Gülen has organized the coup attempt in 2016.

And even if Turkey shut down a Russian aircraft and the Russian ambassador in Turkey was assassinated in 2016, Zeynalov noted that Turkey-Russia relationship is flourishing.

Zeynalov thinks if Russia was able to take Turkey out from NATO it will definitely weaken the U.S. in the region and lead to a new era of Russian domination in the Middle East.

“Turkey is one of the biggest contributors to NATO and only Muslim member,” he said, adding Erdogan is acting more and more like the President of Russia Vladimir Poutine.

He added that a possible adhesion of Turkey to the Shanghai Cooperation Organization, which includes Russia and China, is possible but Turkey today is still very dependent economically with the European Union that represents 50 percent of its economic trade.

Then, concerning the Kurds situation in Turkey, Zeynalov told Red Dirt Report that the Kurdish situation has greatly improved during the last decade with the possibility to have their own media outlets and political party.

“Erdogan has been the most liberal concerning the Kurdish issue,” Zeynalov said, adding the turnaround happened when Erdogan didn’t win the majority he needed at the parliament because of the success of the Kurdish party.

Nehir Aydin could be forced to make what she calls an “impossible” decision: either leave her five-year-old son alone in Canada, making him a ward of the state, or return to Turkey with him, where she and her family are at risk of persecution because of their religious beliefs.

Myrat says he feels safe now in the United States, but feels heartbroken for his friends who couldn’t escape. “It’s so sad. You cry. And for what? Going to a school, reading some books.”