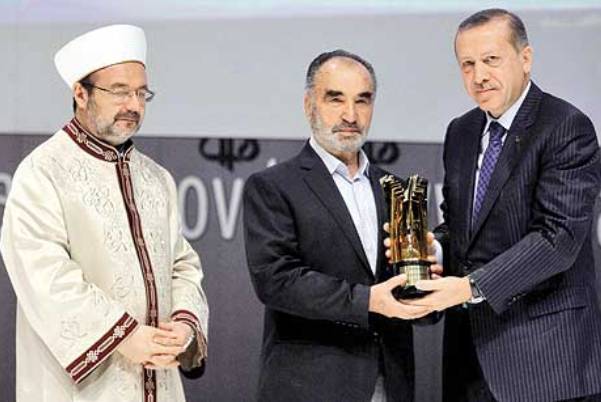 The ruling Justice and Development Party (AK Party) government’s Islamic jurist of choice Hayrettin Karaman has said that pious Muslims cannot accept the integration of Turkey with the European Union, stressing that opposition to westernization and EU integration should be treated as a matter of belief.

Karaman wrote a column on Feb. 13 entitled “The condition for support and friendship” in the pro-government daily Yeni Şafak, saying that relations with the West should be restricted to necessary engagement only.

“[Pious Muslims will] never want integration with the EU, westernization and replacement of their own and glorious civilization with that which belongs to the West and they consider this to be “a issue of faith,” Karaman wrote.

Hayrettin Karaman, a professor of theology and an Islamist ideologue, is highly respected by the government and is seen as the main ideological source of justification for Prime Minister Recep Tayyip Erdoğan’s initiatives. On Jan. 25, Erdoğan gave him a special recognition award at an İstanbul conference organized by Turkey’s Directorate of Religious Affairs.

Considering that many of Erdoğan’s aides are anti-EU and have declared strong anti-Western sentiments in recent years, Karaman’s comments can be seen as justification of these consultants’ rhetoric.

Karaman also expanded on his earlier comments on the protection of minority rights when he said that Muslims should only focus on freedoms of their own religion when living in a country that is respectful of the right of freedom of expression, religion and conscience.

Referring to the fact that non-Muslims or non-practicing Muslims may demand rights in such a society, Karaman said, “if there are demands that are contrary to the religion and morality of Islam, then pious Muslims will not seek to deliver these rights in the name of democracy or human rights, nor will they be happy and cheerful when these rights are given; they just put up with it due to the requirements of the system.”

In a previous column dated Nov.8, 2013, Karaman wrote that “governments cannot pass laws or regulations to afford protection to harmful, ugly and illegitimate acts, the practices… of which the majority disapproves.”

He went on to say, “what if the majority perceives [a behavior] as immoral, a scandal, dishonor, shame, sin or base? Let me explain: Society (the apartment block, neighborhood, community) will react to it, interfere with the ugly acts and exert social pressure. Those who are subjected to these pressures will search for help using the media and government, and there will be chaos within the media and the government will be lax in preventing the pressure. … So, what is the solution? In my opinion, the solution is a ‘democratic system that relies on Islam,’ in this society in which virtually the entire population is Muslim. If the government sticks to liberal democracy, it should not act in a way that breaches the principles of this ideology, but, at the same time, individuals should ‘voluntarily’ refrain from enjoying some of their freedoms for the sake of the majority. If they persistently choose to enjoy these freedoms, then the majority is entitled to exert social pressure as its values are breached.”

In a Dec. 20, 2013 column, Karaman went further: “Those who enjoy certain freedoms that disregard the religious and moral values of the majority and publicly violate them will have to pay the price of what they do. … In an effort to prevent this, society introduces certain restrictions on freedoms — even if these restrictions are not defined in laws — and free people cannot enjoy their freedom fully.”

On Thursday’s column, Karaman also defended the AK Party government which has been shaken by massive corruption scandals.

“If somebody comes up and says that ‘to support the government, we [first need to] look at the level of progress in democracy, human rights and the EU accession process; if it is successful on these grounds, we give our support. If it has shortcomings and or is lackluster, we will withdraw our support and cooperate with others to oust the government,’ then this would be a completely secular, earthly and materialist, an approach that a pious Muslim cannot prefer,” Karaman explained.

Listing the Erdoğan government’s initiatives, promoting religious schools, ending the headscarf ban and bringing elective religious courses to all public and private schools, Karaman said that taking a position against the government will not please Allah and his Prophet.

He also claimed that the exploitation of corruption and other sins against the government contradicts religious and moral values.

Karaman was criticized for giving his blessings in 1996 for commissions — labeled as “donations” — to be set aside from the profits of public bidding tenders. He has tried to address this issue in his columns but the excuse he offered in his column is its own justification for this practice. At the very least, those engaged in these sorts of activities may well have interpreted this as permission to engage in corruption.

In his column dated Dec.27, 2013, Karaman wrote: “Many others have asked me, ‘Is there a problem if we encourage the people who win contracts from the state and make a profit to make donations to charitable foundations?’ Here is what I say to them: ‘If these people who you encourage to make donations are Muslims and would not have made these donations unless you demanded it of them, … they will not earn the [divine] blessing for it. But, assuming that it is written and transparent, charitable foundations can benefit from such donations.’”

In other words, Karaman saw no problem in the government’s “encouragement” of certain businesspeople to make donations to specific foundations. One of these foundations implicated in the corruption scandal is TÜRGEV, a foundation directed by Erdoğan’s son Bilal Erdoğan. Opposition political parties claim the foundation took millions of dollars in kick-backs from land deals and other schemes.