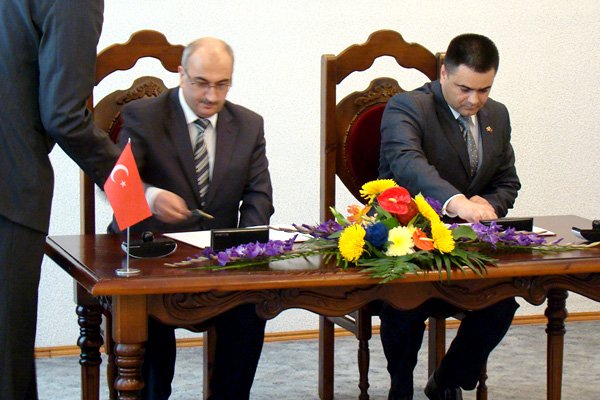 Turgay Şen (left) is signing in 2012 an agreement of cooperation in education with Moldova's Minister of Defense Vitalie Marinuta.

Sen was detained by Moldovan police on charges of terrorism financing when he headed to Chisinau airport to leave for conference in Romania’s Bucharest on March 31. Released from the police custody the same day, Sen claimed asylum in Moldova.

Turkish government earlier asked its Moldovan counterpart to close Orizont High School over its links to the Gulen movement, to no avail.

“Stop the intoxication of education by interfering with political interference. The pursuit of political opponents and opponents of Turkish President Recep Tayyip Erdoğan has also reached Moldova. Here he found some reliable partners in abuses – Dodon and Plahotniuc, with whom he conspired to arrest Turgay Sen – Director of the “Horizon” High School. With this gesture, the authorities did not just carry out a political order but hit one of the successful educational institutions in Moldova, so they hit what we have more price – education. Since this case is very much like political persecution, we ask the authorities to give urgent explanations,”  Maia Sandu, a former Education Minister and the leader of the opposition Action and Solidarity Party said on Facebook.

The incident came just two days after Turkey’s National Intelligence Organization (MIT), in a joint operation with Kosovar intelligence officers, abducted six Turkish nationals, one doctor and five educators, working for a group of schools affiliated with the Gülen movement and removed them to Turkey the same day. Kosovar PM said he was not informed about the operation and ordered an investigation into the officers involved in the operation.

Turkish government accuses Gülen movement of masterminding a failed coup attempt in Turkey in 2016 while the latter denies involvement.

More than 150,000 people have been detained and 60,000 were remanded in prison over Gulen links in Turkey since the summer of 2016. Meanwhile, Erdogan called on foreign governments to punish Gulenists in their own countries.

So far, a number of countries like Saudi Arabia, Malaysia, Georgia and Myanmar handed over academics, businessmen and school principals upon the Turkish government’s request despite the fact that some of those victims already had refugee status with the United Nations.

On Monday, Erdogan’s lawyer Hüseyin Aydın said Turkish intelligence officers could be involved in more abductions around the world “in the coming days.”

“With reports of Turkish intelligence activities in multiple countries, including other kidnapping plots, governments should become much more willing to offer Turkish citizens asylum and must look very skeptically upon Turkish government requests for arrest and extradition,” Freedom House’s Nate Schenkkan wrote on Washington Post on Apr 1.