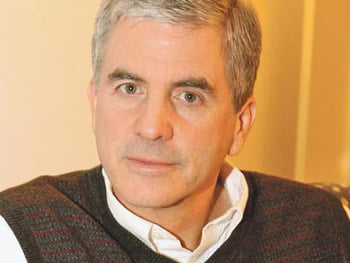 A leading American minister has said all religions need an adherent like Fethullah Gülen, a Turkish-Islamic scholar whose teachings focusing on interfaith dialogue have been widely lauded around the world.

“He is not only my hero for what he has done for the Muslim societies but also [offers] a model for all other religions,” said Dirk Ficca, executive director of the Chicago-based Council for a Parliament of the World’s Religions, an international NGO aiming to cultivate better understanding between the world’s religious and spiritual communities by highlighting the similarities while also acknowledging the differences between them.

In an interview with Today’s Zaman in Brussels this past week, Ficca commended the activities of the faith-based movement named after Gülen, who has authored more than 50 books, most of which have been translated into English, French, Russian and Arabic. Gülen is also known for the hundreds of sermons he delivered so far in which he stresses the significance of strengthened communication between people of different religions and cultures. “I have a deep admiration for him. I have read a couple of his works and also have observed the movement he has inspired. This sociable and kind man has become an inspiration for Turkish Muslims and others around the world for shaping Islam’s highest values and blessings,” Ficca noted, adding that Gülen “encouraged Muslims to treat everyone as their Muslim neighbors or brothers,” something, Ficca also said, “all religions should do.”

Businessmen, schoolteachers and academics inspired by Gülen’s teachings — mostly known as Education Volunteers in Turkey — have opened hundreds of educational institutions of all sizes, from kindergartens to universities, in over 100 countries so far. Each year, select students from those institutions come together in Turkey for a traditional Turkish Olympics. Last year, participants from 120 countries around the world took part in the annual cultural and linguistic contest. “Wherever I go, I see a Gülen movement organization,” Ficca said, expressing his appreciation of the initiative’s coverage.

Also lauding the movement’s decentralized and completely non-hierarchic structure, which is completely based on volunteerism, Ficca said the Gülen movement is different in that it is a movement completely between people, whereas institutions serve functional and practical purposes rather than holding a managerial power and authority. “I think that the people should feel that they are in the service of a much bigger thing [than institutions],” the minister explained. For Ficca, the Gülen movement with its said traits is also a model for the Council for a Parliament of the World’s Religions.

During the interview, Ficca commented on how interfaith dialogue should be understood. He said their council promotes the individuality and uniqueness of all religions and their coming together around a table to communicate with each other under the council’s roof. He further explained that an agreement or consensus in approach to a certain matter is not a requirement to conclude a meeting. Stressing that they would like to receive all participants as they are, with all their differences, Ficca said sometimes the organization’s aim is presented as the uniting of all religions but that “nothing could be farther from reality.” “Dialogue is about mutual understanding whether we agree or disagree,” he added.

Every five years, the council organizes an international gathering of the “parliament” at a different city. Since the early ‘90s, the event has been held in Chicago, Cape Town, Barcelona and most recently in Melbourne last year with a wide participation of representatives from religious and spiritual traditions around the world. The next meeting will be held in 2014, and the candidate cities to host the gathering are Guadalajara and Dallas as well as Brussels.