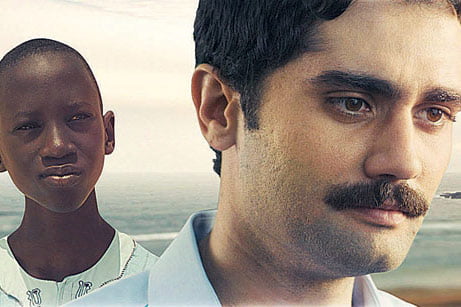 The debut feature of director Levent Demirtepe, “Selam,” as the producers of the film have announced, is indeed the first Turkish film to be shot on three different continents. The thing that stands out the most about the film is that it is made as a labor of love and with some very good intentions.

I’ll give it that; however, despite its large production capacities and its most important message of peace and understanding, I do have a problem with the film’s reductionisms and its simplification of characters who live in conflict areas, for once again we come to the muddy waters of the harsh differentiation between black and white, love and hate.

This is the story of three very pious teachers who have been appointed to teach at Turkish speaking schools in three different countries. We open with a shot at the airport and this is where we are introduced to the well-meaning and beautiful teacher Zehra (Burcin Abdullah) and her colleague and platonic flame Harun (Yunus Emre Yıldırımer). Zehra has been appointed to teach at a school in Kabul, Afghanistan, and Harun has been appointed to teach in Senegal. These two are obviously in love, but their idealism to teach children and relay them a message of love and tolerance has conquered their earthly appetites. They look upon each other with longing, but the mission calls. There is also the teacher Adem (Hasan Nihat Sütçü); he has already been teaching for some time in a school in Bosnia and Herzegovina to students from a mixture of ethnic and religious backgrounds. Adem has left his pregnant wife alone back in İstanbul for the love of his job and his beliefs.

The stories of the three teachers move in parallel as they interact with the troubled students around them. Harun tries to help the young boy Aya in Senegal. Aya lost his younger sister several months ago because he and his family could not find the means to take the wounded girl to the hospital from their village. A rich white French couple refused to give the family a ride and because of that Aya has channeled all his hate into white people. Harun consistently tries to tell the boy that nothing can be achieve through hate and anger and that he must find forgiveness in his soul. A beautiful message, but I find it unbelievable that even for a boy such as Aya, who speaks French and comes of age in a country still affected by the remnants of French colonialism, his attitude toward people can be so simple.

Meanwhile, Zehra teaches a classroom of young kids in Kabul. She tries to help a specific student named Mahmoud, who is always trying to find meat for a younger brother that has been suffering due to lack of protein. Mahmoud’s pious mother incessantly denies them the meat because she does not have the means to buy the expensive product. Zehra is always there for Mahmoud when he gets into trouble trying to sneak away meat from various sources. Zehra is a soul full of love and generosity; she always makes sure to show her students compassion.

Adem, over in Bosnia and Herzegovina, deals with a Muslim student, Amir. Amir, a talented singer and a confused teenager, is angry at another student named Sascha (who happens to be Christian), over the unfortunate events that happened to his father during the Yugoslav war. Adem always tries to look out for Amir, and tries to convince him that only tolerance and understanding can resolve his personal conflict. We also watch Adem interact with another Christian tutor — they engage in a conversation where they declare that they respect and understand each other’s differences and that what unites them is this exact understanding.

All in all, the film, through the parallel stories of the three teachers, endeavors to relay some very important humanistic values: that solving human conflicts can only be achieved through mutual dialogue and the will to listen. And, of course, the initiation of this dialogue comes with the deliverance of “Selam,” which can be summed up with the words: “We come in peace.”