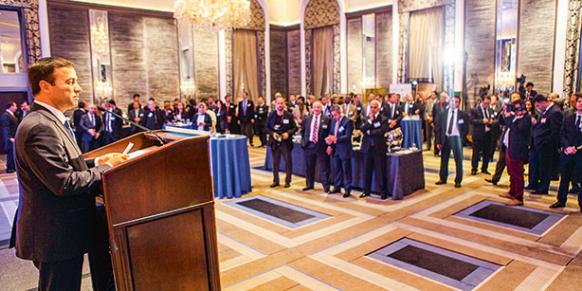 The Journalists and Writers Foundation collaborated with the United Nations to gather speakers from across the world in New York. (Photo: Today's Zaman)

A recent summit organized jointly by the Journalists and Writers Foundation (GYV) and the United Nations in New York has highlighted the correlation between education and sustainable development.

The health, education and foreign ministers of dozens of countries gathered at the event, held in New York on Friday.

GYV President Mustafa Yeşil, in his opening remarks to the UN high-level meeting, said sustainable development can only be achieved through a good education program. Yeşil said Turkish schools inspired by Islamic scholar Fethullah Gülen that have been opened in many countries around the world have achieved the level of success they have enjoyed due to sectoral support. Yeşil said the schools’ admission process does not discriminate on the basis of cultural or ethnic background. He also noted that having well-educated generations is not the only vital part of creating a sustainable future, but societal peace too, especially when there is an accountable and transparent state.

Turkish Confederation of Businessmen and Industrialists (TUSKON) President Rıza Nur Meral, who also gave a speech at the event, said most Turkish businessmen say they look to see if a country has a Turkish school when first checking to see if the country is worth investing in.

African Union Secretary-General Jean-Baptiste Natama, another speaker at the program, said poverty and a lack of education are behind Africa’s problems. Baptiste said African nations need more investment and services in education, such as Turkish schools, in order to achieve sustainable development.

US Congresswoman Yvette Clarke and Senator Chuck Schumer sent messages to the reception, thanking the GYV for its efforts in supporting education.

21 Georgian NGOs have recently signed a joint statement addressing the President of Georgia, with a request to grant refugee status to Mustafa Emre Çabuk and his family, with the statement being published on Georgian Young Lawyer’s Association website.