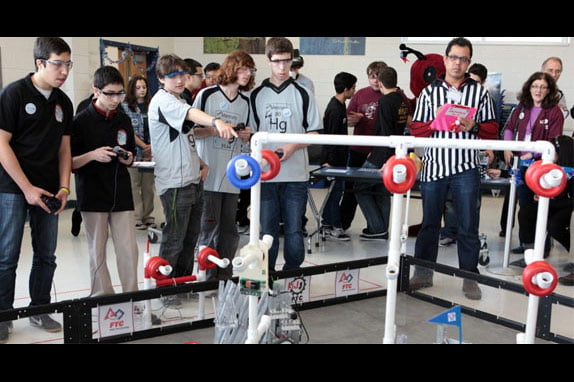 Students from the private Turkish school Pioneer Academy of Science were granted the prize of the best robot design in a competition in New York last week. (Photo: Cihan, Orhan Akkurt)

Students from the private Turkish school Pioneer Academy of Science were granted the prize of the best robot design in a competition in New York last week. Ninety-five schools participated in the competition FIRST Tech Challenge (FTC) displaying designs of robots.

At the end of the competition, the team from the Pioneer Academy of Science, including Sinan Şahin, Ali Sinan Çiftçi, Bünyanin Yusuf Konuk, Hilal Bulur, Hilal Tekin, Mücteba Gürcanlı and Zeynep Hale Teken was awarded the prize for best robot design. The FTC is considered by many schools in the US to be among the most important competitions for the young.

Şahin, one of the team members, told reporters that they worked and studied hard for the competition. “We had to finish our design in a limited time using technology such as Bluetooth and Wi-Fi to meet the expectations of the jury,” said Şahin.

The team will participate in another competition on Feb. 9. Fatih Çeliç, the team’s coach, said that they aim to receive an award from the upcoming competition as well. “Our students are very hard-working and they are doing their best to win the competition,” added Çeliç.