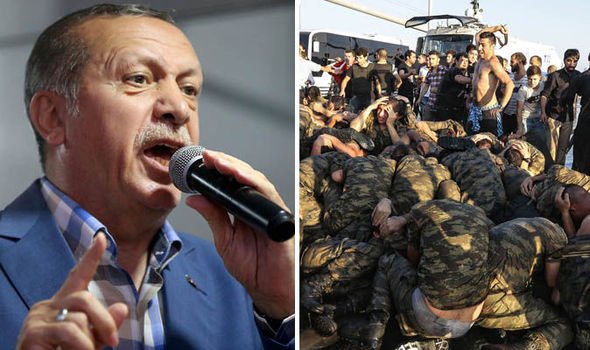 Turkish President Recep Tayyip Erdogan has good reasons to be living in constant fear. Only a few months ago, on July 15, hundreds of military officers, including several in his own security detail, attempted to topple him in a coup d’état. But the way he thinks he can best fight and win a future attempt at his governance — and life — exposes Turkey to the risk of civil war.

Erdogan’s fight against coup-plotters is legitimate. His paranoia is understandable. But his efforts to build a private army of devotees is not. The level of paranoia surrounding his 1,100-plus-room palace is reaching new heights. One of his chief advisors, Yigit Bulut, recently accused foreign chefs on cooking programs shown on Turkish TV stations of being foreign spies. Bulut claimed that foreign chefs are touring Anatolia merely to gather intelligence and are collecting information about military bases and industrial facilities in Turkey. Bulut may sound amusing, but he is one of Erdogan’s chief advisors.

This paranoia is pushing Erdogan and his men into an abyss of paranoia — and civil war. There are signs, also, that Erdogan’s adventurism will not be confined only within the Turkish borders. In a shake-up of the national intelligence agency, for instance, Erdogan’s government created the position of a deputy undersecretary in charge of “special operations.” Pinar Tremblay, a Turkey expert, says:

“The establishment of this unit tells us that Turkish adventurism is not to be quelled any time soon. To the contrary, it will expand because now we see the government is willing to spare more funding and human resources to special operations. The institutionalization also tells us that Turkish presence in Syria and involvement in Iraq will be coordinated from this center and that this unit is set to grow in the coming months.”

There are also signs that Erdogan wants to fight an all-out war inside Turkey against any and every enemy he may be facing.

Burak Bekdil, based in Ankara, is a Turkish columnist for the Hürriyet Daily and a Fellow at the Middle East Forum.