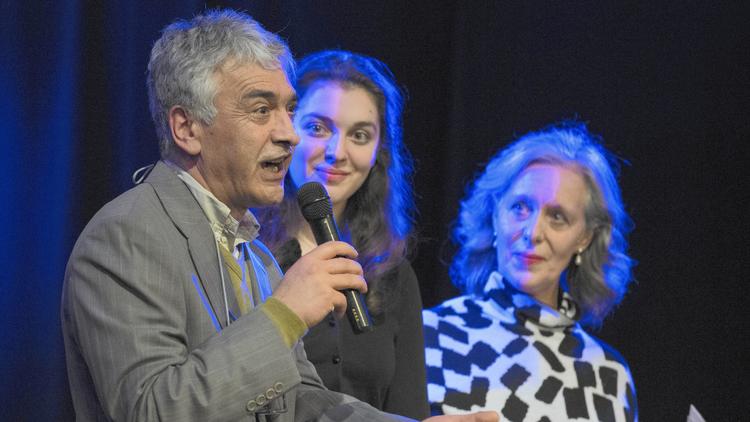 Ibrahim Parlak speaks to the crowd before a February 2016 benefit concert performed by Jeff Tweedy, lead singer of the Chicago band Wilco, in southwest Michigan. Parlak is fighting U.S. government attempts to deport him to Turkey. (Mark Davis / Pioneer Press)

Mustafa has never met his sister’s neighbor, but two weeks ago, he received a WhatsApp message from her.

“Your dad passed away,” it read in Turkish.

He frantically messaged back: How did he die? What happened? But his questions were met with silence. Mustafa believes his father is dead and he has mourned him, but he has no way to confirm his father’s fate.

Like other Chicago-area Turks, Mustafa’s contact with his family and understanding of the situation in his home country have been limited. A text message here. A tweet there. A Facebook video shot by a journalist. A photo shared on a news site before it went dark.

Since a failed military coup in July, Turkish President Recep Tayyip Erdogan has arrested tens of thousands of people, including soldiers, police, judges and journalists, as part of the investigation of the coup, during which at least 270 people died, according to The Associated Press. Erdogan blames the coup on U.S.-based Muslim cleric Fethullah Gulen, whose teachings and writings have inspired the Hizmet movement.

“This was our 9-11,” said Umut Acar, consul general of Turkey in Chicago. “You felt a big amount of fear and anger. Thanks to the bravery of our people, we thwarted and foiled this attempt.”

Zeynep Uysal, 31, of Buffalo Grove, said she believes the information being put out is biased in favor of Erdogan, and on Twitter she sees human rights violations happening every day.

Uysal, who has read Gulen’s writings, said she is fortunate that her family was visiting the United States to help her sister with her newborn baby when the coup happened. She said she’s concerned for her family and friends, as well as other people, who are still in Turkey.

“It looks like to me if you’re not a hardcore supporter (of Erdogan), you’re in danger,” Uysal said. “It doesn’t matter what you think. If you’re against Erdogan or if you are criticizing and asking for more democracy and more freedom, you’re in danger.”

Mustafa, who is affiliated with the Turkish American Society of Chicago in Mount Prospect, asked to be identified only by his first name because of fears of repercussions to him and his family. He said he heard from a distant family member via WhatsApp that his brother, an emergency room doctor in Turkey, has been put on probation and is awaiting an investigation. Mustafa said his brother’s medical license and his sister-in-law’s teaching license have been taken away.

“Safety is the No. 1 concern in Turkey,” Mustafa said. “If you are detained, you don’t know what is going to happen to you. I’ve seen pictures of the detainees. They torture them. We don’t have a lot of safety.”

When his father died, Mustafa could not call his siblings for fear it would put their lives in jeopardy because Mustafa publicly supports the Gulen movement and democratic concepts like freedom of speech.

Acar called Hizmet a terrorist group that has a “cultlike network” with followers embedded in military, police, business, education and charity organizations, to name a few. Many of the media organizations that have been shut down have actually been propaganda tools of the group, Acar said.

“We’re not talking about an independent newspaper that is criticizing the government,” Acar said. “We have a lot of pieces every day that is critical of the government that is OK and it’s no problem, but no media has a right to glorify and support and disseminate terrorist organizations.”

But Mustafa said Gulen is not behind the military coup because he consistently teaches equality and education. The Turkish American Society of Chicago is hosting a few people from Turkey who have fled because of their opposition to Erdogan. One of them left without saying goodbye to his wife and three children.

“I worry about the people of Turkey, I worry about my family,” Mustafa said. “If I had the power, I would give them visas so they could come here and live here in this beautiful country.”

Uysal said the crackdown on the media began before the coup and believes that the coup only strengthened Erdogan’s position. Uysal said she has read Gulen’s books and agrees with his ideas about education, humility, love for humanity and love for God, and she, like many others, does not believe he is behind the coup.

“Whoever is claiming something needs to present the evidence, it needs to be disclosed and understood by all these people, but instead they have no idea,” Uysal said. “(Erdogan) needs to provide the evidence, but the problem is that in Turkey, there is no law, no justice and all these judges, attorneys and even teachers are detained or arrested.”

Gulen has denied any connection with the coup, but Turkey is demanding that the United States extradite him. The crackdown has raised concerns among European nations and human rights organizations, which have urged the Turkish government to show restraint and allow independent monitoring amid allegations of torture, beatings and rape, according to an Amnesty International news release.

“Life is back to normal, our economy is solid and strong, our institutions are working and the government is working and most importantly, Turkey is enjoying a historical and iconic political unity,” Acar said.

Ibrahim Parlak, a Michigan restaurant owner and Turkish immigrant who has fought deportation for more than a decade, said the Turkish government has become more brazen with its tactics, even committing crimes in front of the cameras. 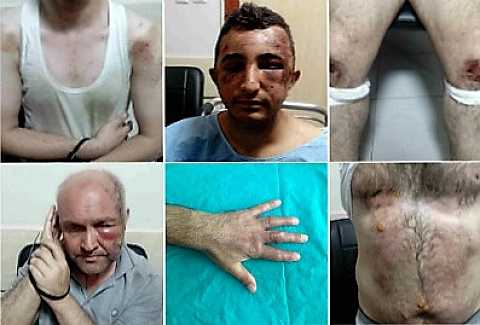 A motion to reopen Parlak’s case was recently granted, and he is safe from deportation until his case goes before an immigration judge. In the meantime, Parlak said the U.S. government needs to take a harder line in condemning Erdogan’s actions.

“How can we let someone we call an ally get away with this?” Parlak said.

But Mustafa said few people know what is happening in Turkey, and for those who do know, Mustafa has no answers on how they can help.

“People have lives and my American friends who know about what’s happening in Turkey ask how they can help, but even I cannot help,” Mustafa said. “I can’t even help my own brothers and sisters. Wouldn’t it be nice to call my brother? Chitchat and ask how he’s doing? I don’t even know how my father died. People are scared to tell me.”

Note: Videos and image of tortures have been added by HizmetNews.Com

The U.S.-based cleric Fethullah Gülen calls the United Nations to form an international commission to investigate Turkey’s controversial coup attempt on July 15, 2016, and to acquit himself after Turkey’s President Recep Tayyip Erdoğan accused him of launching the coup d’état.