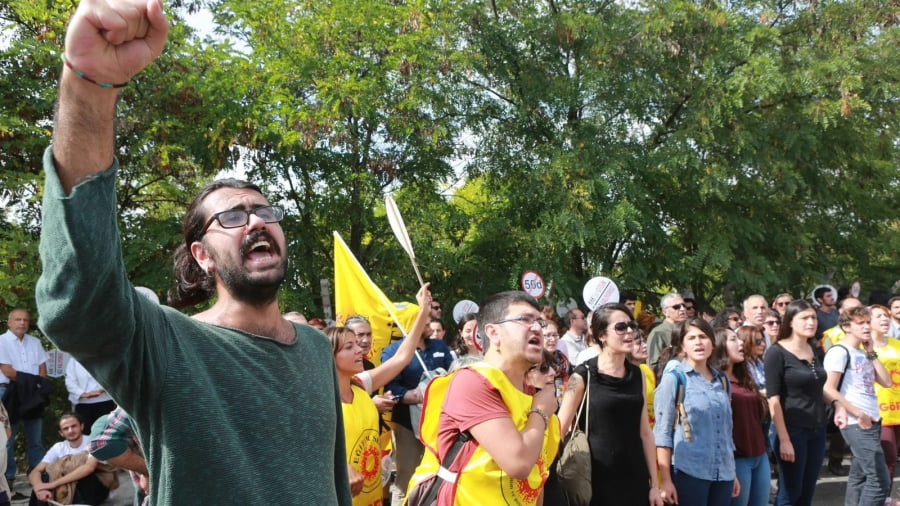 With more than 120,000 public workers suspended and nearly 40,000 people in prison, the aftermath of Turkey’s failed July 15 coup is being felt across every part of society, including its highest-ranked schools.

The day after the coup attempt, 1,577 deans — working at nearly every university in the country — were forced to resign. An estimated 200,000 students were left in limbo after the closure of 15 universities and 1,043 private schools reportedly linked to Fethullah Gulen, the cleric the Turkish government blames for the putsch. More than 6,000 academics at 107 universities have since been fired as well, many accused of links to Gulen’s movement or the Kurdistan Workers Party, or PKK.

“These last few months will have an impact on our society that will last for decades to come,” said Ozgur Bozdogan, the head of Egitim-Sen, one of the country’s largest teachers unions.

At Istanbul’s Bogazici University, students and faculty members have been holding daily protests this week after President Recep Tayyip Erdogan used emergency powers to appoint a new rector, bypassing a decades-old practice that saw university staff members elect their boss from among their ranks.

“The old rector was trying to defend the democratic autonomous structure of the university,” said Ahmet, a senior studying economics, who asked that his full name not be used. Founded in 1863 by American philanthropists, Bogazici has long been considered one of the most liberal schools in the country. Police are not permitted to enter the campus, and student groups regularly host conferences on largely taboo subjects such as the Armenian genocide and the treatment of the country’s Kurdish minority.

“You can link anyone against you to any terrorist organization, without any investigation.”
— Mustafa Turgut, a high school literature teacher in Istanbul

At a protest this week on the street outside the campus gates, Ahmet noticed a police officer staring at him across the crowd of 300 hundred students and teachers with whom he was marching. “He walked towards me and the crowd split apart to make way for him, before I started running,” Ahmed said.

Police grabbed Ahmet, but moments later fellow students freed him. “We all wanted to make sure no one was detained, because now under the state of emergency you don’t know how long you will be in prison,” he said.

“The government wants to end our autonomy, they have always seen Bogazici as a kind of enemy,” Ahmet said. The newly appointed rector, Mehmed Ozkan, has pledged to protect the university’s “participatory, pluralistic and free tradition.” But students such as Ahmet fear space for criticizing the government will only shrink. Ozkan’s sister is a parliament member from the ruling Justice and Development Party, or AKP.

It’s not just university students who are being affected by the sweeping post-coup measures.

When primary and secondary students returned to school this year, they spent most of the first day watching videos about the “triumph of democracy” over the coup plotters, and speeches by Erdogan that equate the civilian counter-coup with historic Ottoman victories going back 1,000 years.

Meanwhile, authorities scrambled to find replacements for the nearly 30,000 teachers at the primary and secondary levels who had been suspended and another 30,000 who had been fired under emergency rule, accused of having ties to Gulen or the PKK.

“People fear this climate, because they cannot really protest against this process; everyone fears losing their jobs,” said Mustafa Turgut, a high school literature teacher in Istanbul. Turgut has no books to teach from, because the Ministry of Education has ordered a review of all textbooks for possible links to Gulen or the PKK.

“We have experienced a coup, and right now there is a sensitivity in our society,” Muammer Yildiz, the deputy undersecretary of education said this month about the textbook restrictions. “We follow this sensitivity carefully.”  Millions of textbooks had to be reprinted for the new year, and 58 textbooks were banned.

Turgut has watched his colleagues being fired or jailed, while others have left the country. One teacher from the eastern city of Tunceli, Turgut said, fled to Canada with his two children. “I talked to him on the phone, he said ‘I don’t want to raise my kids in a madman’s hell.’”

The Turkish government has designated both Gulen’s movement — which at one point ran some of the country’s leading private universities and schools — as well as the PKK as terrorist organizations, and said the dismissals of teachers was meant to root out these groups.

The suspended teachers, Prime Minister Binali Yildirim said in September, “have had certain types of connections to terror,” and investigations would determine “how many of these are directly associated with the terrorist organization, and how many are not.”

The Education Ministry did not respond to requests for comment.

Nearly 10,000 of the teachers fired or suspended after July 15 have been members of the Egitim-Sen union, which often rallies alongside the pro-Kurdish People’s Democracy Party, or HDP, itself now the target of an investigation for suspected ties to the PKK. About 1,800 of the left-leaning union’s members, including Turgut, are facing criminal or disciplinary investigations into terrorism and other serious crimes.

The investigations are the end result of years of efforts by the Justice and Development Party to control schools, said Turgut, who until three weeks ago taught at an elite high school in Istanbul where students must score in the top one percentile on national standardized tests to enroll. In the last two years authorities have tried to alter the curriculum to be more conservative, canceling programs such as concerts, plays and even student-run philosophy discussion groups.

“But after the coup, the [AKP] has been taking bigger steps and faster steps to make these schools more conservative,” Turgut said, “and now it is much easier to do, because you can link anyone against you to any terrorist organization, without any investigation.”