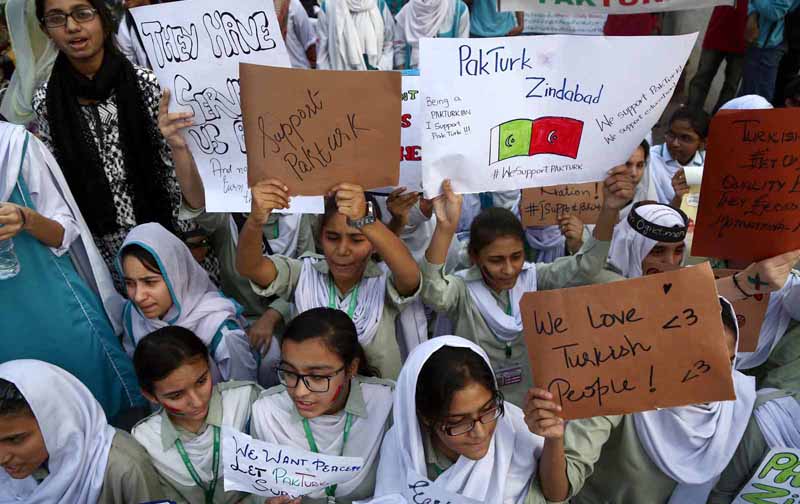 KARACHI: Students of Pak-Turk School staged a protest against deportation of Turkish staff from Pakistan. INP PHOTO by Qaisar Khan

The other day a student of mine came to me in a distraught state. He was a student at the Pak-Turk School in Lahore and was perplexed at the abrupt deportation of all Turkish teachers at the request of the Turkish President Erdogan. “The Pak-Turk School changed my outlook in life. The teachers were more than simply teachers, they were mentors and helped students in all aspects of life,” this student exclaimed. “Why are they kicking out my teachers who have done so much for my country?” he wondered.

His concerns and questions are genuine, and people are rightly wondering, and protesting, the deportation of Pak-Turk teachers when there is no allegation, no scandal, no link between them and any terrorist organisation. For the last couple of decades they have simply educated the students of Pakistan, often with huge financial subsidies. Yes, they had a particular vision and followed it closely, but all schools, from government schools to elite and regular private schools have a mission statement and they try to follow it. As long as the mission of the Pak-Turk schools was not to undermine any part of Pakistan’s constitution, they should have been left undisturbed, and even supported.

The saga of the Pak-Turk schools however points out an important element of how Pakistan views itself and conducts its foreign policy. The reasons behind the deportation are simple at a level — at the request of the Turkish president — but point out a very deep and significant problem with Pakistan.

The teachers were more than simply teachers, they were mentors and helped students in all aspects of life,” this student exclaimed. “Why are they kicking out my teachers who have done so much for my country?” he wondered.

Pakistan’s foreign policy was shaped in the 1940s in very simplistic terms. The Cold War mandated a certain worldview where the choice between ‘The West’ and the ‘Communist bloc’ [together with the slightly oddly named Non-Aligned Movement which became an aligned movement of sorts later], was clear, but even with that Pakistan’s worldview was even simpler. Pakistan saw the world then, and now, as a choice between ‘friends’ and ‘foes.’ The world politics of people like Machiavelli, Metternich, Bismarck and others was lost on them, and of course Kautaliya was too ‘Indian’ [read, Hindu] for their palate. Hence, international politics was a simple ‘friend’ vs. ‘foe’ choice for Pakistan.

In this realm, the United States became a friend early on for Pakistan. Even when the first military ruler, Field Marshall Ayub Khan, became unhappy with the United States he penned [apparently] a book called ‘Friends Not Masters’ simply missing the point that there aren’t really any friends either. So when the United States was our friend, and this has happened in the 1950s and early 1960s, then in the 1980s and then more recently in the War on Terror, we have bent over backwards to do whatever they wanted — obviously friends are supposed to go the extra mile.

But then just as three times the US became our ‘friend’ we were aghast when they stated that they were following their national interest rather than some rosy notion of bosom buddies. We were shocked that under the Kerry-Lugar bill they wanted to ask us what we did with their money, rather than just giving it to a friend and forgetting about it. All this made us sad and distraught, and at times it seemed as if we were the forlorn first wife than a mere friend of the US.

In the 1960s, we also became close friends with the People’s Republic of China. Our border agreement with China gave them a fairly large portion of the Gilgit-Baltistan region, and no protest was registered anywhere in Pakistan, because obviously China was a ‘friend’ and so one must make a ‘friend’ happy. Later when Pakistan was in desperate need of help in the 1965 war, China agreed to provide some aircraft but indirectly, and so our relationship was further cemented — it didn’t matter that China did not want to rock the boat further with India and gave us help only through Indonesia.

Later, as we got further away from the US, because they were behaving in a transactional manner, we got closer to China, in every respect — from military cooperation to trade and industry. Our local industry suffered a bit due to flooding by cheaper Chinese goods, but we didn’t raise even a whimper, because they were friends.

More recently a rising China wanted a foothold in the Persian Gulf so that they could increase their economic and military imprint. Here again we happily agreed to the China-Pakistan Economic Corridor to help China achieve its objectives, without even knowing what exactly it will do for us, simply because we are friends. Obviously, a friendship higher than the Himalayas and sweeter than honey cannot be measured through the crude prism of ‘national interest’!

Pakistan also has another all weather ‘friend’ — Turkey. For the first couple of decades we were a bit oblivious to this country, but then beginning with the government of Zulfikar Ali Bhutto we began to take this friendship seriously. We claimed that we had long standing relations with this ‘brotherly country’ without knowing much about the background of this relationship.

Historians and others were a bit lost on the historical dimension of this relationship, but no one asked a question for one does not ask questions of friends. So when Turkey agreed to help Pakistan in various ways, it was not asked why we couldn’t undertake those initiatives ourselves, why our own companies could not develop their capacity, simply because one doesn’t say no to friends. It simply didn’t matter that Turkish companies charged an arm and a leg, and given the same high payments Pakistani companies might have given more returns.

It is with this background that the ‘request’ of Friend Erdogan, the President of Turkey, could not be turned down. It didn’t matter that it had no credibility, no reasoning, and was simply not in Pakistan’s national interest. Did anyone think who would fill in the gap when Pak-Turk schools are shut down? Did anyone imagine that thousands of students might be without teachers, and simply education, in the wake of this decision? Did anyone care about the adverse effect of this decision on the already precarious educational situation in the country?

Clearly, Pakistan needs to rethink how it views the world. A mature country defines international relations in terms of ‘national interest’. There are no relatives, friends, foes, etc in international politics. There is only national interest: and countries adopt whichever measures maximize them.

Pakistan’s issue is not simply that of a skewed understanding of foreign affairs, it is deeper and more fundamental. The extent to which we become the handmaid of every ‘friend’ [and this is true since day one], also shows that we are uneasy with our own identity and existence. When we were the buddy of the United States we quickly became Americanised — American English, American goods, American TV etc became the norm in Pakistan. When China became our closest chum, dubbed Chinese dramas were widely shown in Pakistan, and in a country where people don’t even know their national or official language properly, we began studying Chinese.

And now Turkey is our new love. We pay through our nose for Turkish investments, we can’t seem to get enough of Turkish dramas, and when we want to show their President a good time, we ban the entry of the common man in the centre of the city.

Very soon, Pakistan will be seventy years old. Most human beings figure themselves out by the middle age — 30s or 40s, but then at that time we were busy in the vivisection of the country. We are now in a fairly advanced stage, but it seems that we have not entered our teenage years as yet. It is time to be sure of ourselves and put our country and its interests before everything. Only then we will be able to celebrate the mature age of 70 next year.