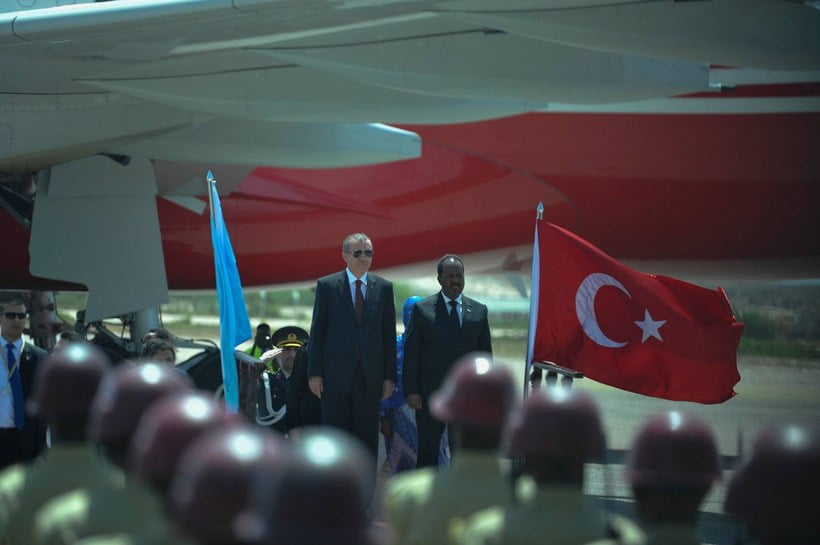 Tens of thousands of people died and hundreds of thousands have been displaced as a result of a number of crises in the Horn of Africa over the last decade. Many reliable international reports expose that millions more are still in need of immediate assistance. However, due to a tremendous lack of operative political apparatus in Somalia, most members of international community are either unable or unwilling to provide consistent humanitarian support.

Despite the fact that there has been almost no international presence since mid-90s, Turkey has moved in the opposite direction, paying more consideration to Somalia than any other country in the world and established the largest-ever embassy in Mogadishu – a symbolic mission to Turkish interest in one of the most strategic locations in Africa.

In fact, Turkey’s traditional form of engagement with Somalia used to be humanitarian aid-centric, but its recent approach led by President Erdogan seems to transform towards a more power-seeking direction at regional level with an expanding military presence. Therefore, Turkey has recently completed equipping its first military base in Africa in Mogadishu. The base is to host Turkish military officers to train Somali soldiers in their fight against terrorism. It will become operational shortly and around 200 Turkish military personals will be deployed to the base in the first stage to train 10,500 Somalian soldiers.

That being said, many pundits have been asking about the main cause behind Turkey’s changing and growing realm of existence in Somalia. Particularly, President Erdogan’s recent line of liaising with Somalia is perceived by many local and international audiences as a religiously-motivated move, part of broader efforts to extend his personal influence as the leader/khaliah of the Muslim-majority countries in the region by revisiting some of the archaic approaches that once conducted by the Ottomans. Despite the rising international impeachment, the questions around President Erdogan’s real intentions regarding Somalia have remained unanswered up until very recently.

Yusuf Kaplan – one of the Islamists journalists who is known to advice president Erdogan on matters related to Africa, has provided us a number of answers in an article he composed recently with respect to Turkey’s ongoing engagement with Somalia. In his article, Yusuf Kaplan crystallizes the main motive behind President Erdogan’s powerful commitments to Somalia, which many resemble to a carbon copy of Turkey’s sectarian politics for Syria, which was embellished with President Erdogan’s aspirations to lead millions of Muslims in the region through an Islamist narrative.

Here is some of Yusuf Kaplan’s words from the article he penned down on September 18, 2016; ‘’I need to remind you once again that the strategic move we started for Somalia has multiple and crucial goals. After Syria as a gate to the region was closed, we have advanced a new strategy towards Somalia, so that we can make sure our influence can reach to the Red Sea and the Indian Ocean.

The strategy that Turkey develops over Somalia can be resembled to the one thatOttoman Empire once conducted in Yemen. The Ottomans were able to extend their sphere of influence up to the Indian Ocean and ensure the security of Mecca, and Madinah through having a powerful existence in Yemen. That was the main reason behind Ottoman’s leadership in the Muslim world.

Within the same logic, Turkey’s current engagement in Somalia is to spread Turkey’s sphere of influence up to the Indian Ocean and also to make sure that Mecca, and Madinah are fully secured. With these strategic steps, soon Turkey will de facto be ready to announce its leadership in the Mulim world. One needs to underline that this is the reason why not only the Britain but also the entire Westis going mad about Turkey’s strategic move in Somalia that used to be one of the important chains of Western strategic hoop.’’

Although these are some of the internal voices uncovering one’s true colors, President Erdogan has always denied that Turkey is trying to gain influence in Somalia, adding that all the assistance and aid his government provides is simply to establish peace in a dived country that shares the heritage of the Ottoman Empire. Nevertheless, one seems clear that President Erdogan’s Islamist mindset influences Turkey’s foreign policy manifesting itself in Somalia as well.

For many, President Erdogan’s new form of involvement in Somalia has symptoms of an influence-seeking aggressive leader with an Islamist agenda to consolidate his own patronage in the region – a dangerous phenomenon making the country’s foreign policy confusing and provocative with dangerous implications in the Horn of Africa.

* Ebubekir ISIK is a PhD Researcher at the Free University of Brussels (VUB), Belgium. His expertise covers stateless nationalist and regionalist parties.