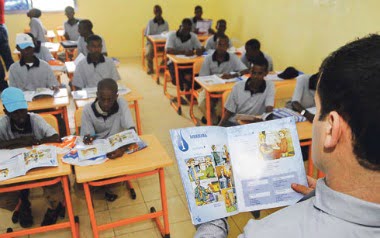 Somali students on Monday filled the classrooms of the country’s first Turkish high school in Mogadishu.

The Somali Education Minister expressed his happiness at the opening of the first Turkish high school in Somalia on Monday.

“It has been wonderful — the students and parents are very happy to have access to quality education,” Somali Education Minister Ahmet Aidid Ibrahim shared in an exclusive interview with Today’s Zaman on Tuesday.

Somali students on Monday filled the classrooms of the famine-stricken country’s first Turkish high school, which the Turkish charity the Nile Organization established in the Somali capital, Mogadishu. Ibrahim noted that “cities other than Mogadishu are also seeking to have similar Turkish schools.”

Ibrahim pointed out the vast number of Somali youth who jumped at the opportunity for a brighter future: “Many students applied and took the admission exam, but the capacity is limited to around 250 students.”

School principal Bülent Ergüneş told Anatolia news agency on Tuesday that the principal language of instruction is English, but students are also learning Turkish as well as other regional languages. In the school’s first year of operation, students will receive 16 hours of English instruction per week as well as instruction in the Turkish, Arabic and Somali languages.

Mathematics, biology, computer skills, chemistry and physics lessons will begin four months after the start of the school year.

Ergüneş explained that classes will move to another building one year from now: “Poor families coming from outside the city currently reside in the former technical college building the government has assigned us. We are making do with our current location until they can be moved to another residence. We will transfer classes to the technical college next year when it is empty and renovations are completed. It is a very nice, large building.”

Though Somali youth have understandably fallen behind academically due to years of civil war, Ergüneş stressed that the “students are intelligent and catch on quickly. They have already begun to hold basic conservations in Turkish.”

English teacher Alper Kılıç told Anatolia that even though he has 12 years of teaching experience, he is excited for the opportunity to teach in Somalia.

The opening of the Turkish high school in Mogadishu is only the most recent example of Turkey’s dedication to education in Somalia, which has been a priority for Turkey since it began reaching out to the conflict-ridden, impoverished country. Turkey also has provided scholarships for a few hundred Somali students to study in Turkey.

Turkey has contributed a higher percent of its national income to Somalia than any other country has contributed to Somalia, as it continues efforts to help the nation recover from its worst drought in 60 years. According to the latest evaluation by the Prime Ministry’s Disaster and Emergency Management Directorate (AFAD), the total Turkish aid collected through campaigns launched by AFAD, the Religious Affairs Directorate and other organizations has surpassed TL 500 million.

ŞEYMA AKKOYUNLU, İSTANBUL A top Afghan official has praised Turkey’s efforts to boost education and help in restructuring Afghanistan, saying Turkish assistance to the country was unparalleled. “Turkey has a very special place in Afghanistan. It is the only Muslim country in NATO, and the Afghan people trust Turkey. The source of this trust is […]