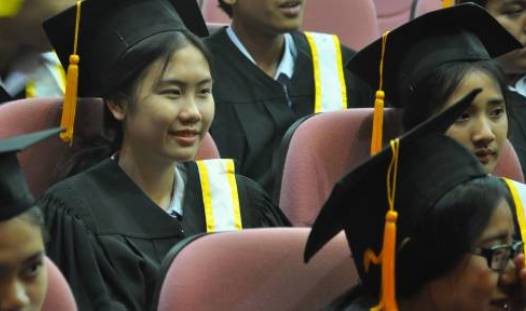 Wattana Maneenai of the Thai Air Forces presented the students their diplomas. Maneenai, in his address, stressed the significance of education in today’s world.

Yusuf Can Bektas, principal of Siriwat Wittaya School, said, “The graduates of the Turkish schools around the world are contributing to the global peace.”

One of the parents, Suchin Chanarong, said, “I am happy to have a Turkish school in my neighborhood. My son has graduated just today but he has seen many countries at such a young age. He represented Thailand in Turkish Language Olympics, which makes me feel so proud.”

One of the graduates Kotchakorn said, “I know that my parents are proud of me. I am happy to be a Turkish school graduate. Our schools gave us many opportunities. I participated in last year’s Turkish Olympics. It was a great opportunity for me.”
Some of the students were seen in tears during the event. Traditional dance and Turkish, English and Thai song performances were next.

The ceremony came to a close with throwing caps in the air. The Turkish Chindamanee, Siriwat, Wichai, Pan-Asia Schools were previously honored with Thai King’s Award.