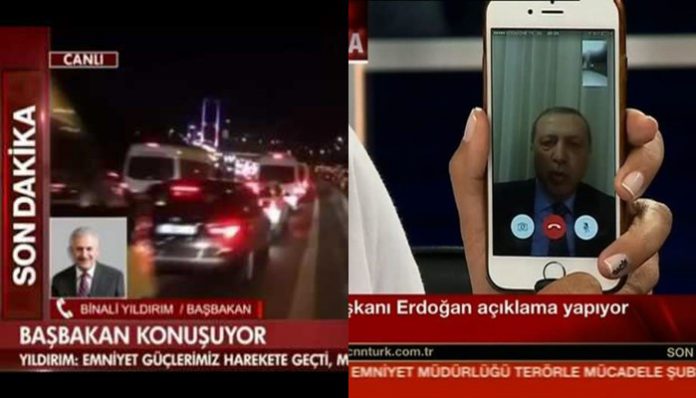 “I, myself, create the main opinion. We spoke with our president [Recep Tayyip Erdoğan] and concluded that it could have been an attempt by FETÖ [a derogatory term used by government circles to refer to the Gülen movement] members. … That could have been true or false at that moment,” said Yıldırım.

Writing a column about the interview with Yıldırım, columnist Murat Yetkin underlined that Yıldırım was still unhappy with National Intelligence Organization (MİT) Undersecretary Hakan Fidan for not informing him about the coup attempt despite the fact that he learned of it hours before it started.

“The time [when he talked with Fidan on the phone] is important because the prime minister had a live call with NTV at 22:03 as the first official [announcing the coup attempt] and said the attempt was not within the chain of command or an order from the Turkish Armed Forces, but rather that an effort by a junta within the army and Fethullahists [people sympathetic to Turkish Islamic scholar Fethullah Gülen] were masterminding it.”

Questioning how it was possible that the prime minister had not been informed at 10:40 p.m. despite the fact that a major had notified MIT at 16:10 about a possible coup attempt and Fidan went to military headquarters at 18:10 to speak with Chief of General Staff Gen. Hulusi Akar about how serious the plan was, Yetkin also asked how it was possible not to inform Yıldırım about the coup despite the fact that some soldiers had taken to the streets and jets had been flying over Ankara from 21:00 on.

Yetkin emphasized that Prime Minister Yıldırım has been displeased with the situation of not being informed by MİT’s Fidan despite a year having passed since the coup attempt.

“I have asked this to the head of MİT. ‘How is it possible?’ I said. The prime minister is not aware of it, the president is not aware of it. OK, informing the chief of general staff is pretty normal, but the prime minister should also have been informed because you are responsible to him. But he could not respond to this. He didn’t say anything,” Yıldırım had said in an interview following the coup attempt last year.

Turkey survived a military coup attempt on July 15, 2015 that killed 249 people and wounded more than a thousand others. Immediately after the putsch, the Justice and Development Party (AKP) government along with President Recep Tayyip Erdoğan pinned the blame on the Gülen movement.

Turkish Deputy Prime Minister Numan Kurtulmuş announced on July 18 that 111,240 civil servants have been dismissed from their jobs while 33,180 others were suspended since the botched coup .

Turkish Justice Minister Bekir Bozdağ announced on July 7, 2017 that at least 50,504 people have been arrested and 168,801 are the subject of legal proceedings.

Contrary to accusations made by President Erdoğan and the Turkish government, the Foreign Affairs Committee of the UK Parliament concluded in March that Gülen and the movement he inspired as a whole were not behind the failed coup in Turkey.

The head of Germany’s Federal Intelligence Service (BND), Bruno Kahl, said Turkey could not convince them that US-based Turkish-Islamic scholar Gülen was behind the failed coup in July.

Similarly, Devin Nunes, chairman of United States House Permanent Select Committee on Intelligence, said he has not seen any evidence showing Gülen’s involvement in the putsch in Turkey.

In addition, a report prepared by the EU Intelligence Analysis Centre (IntCen) revealed that the coup attempt was staged by a range of Erdoğan’s opponents due to fears of an impending purge.