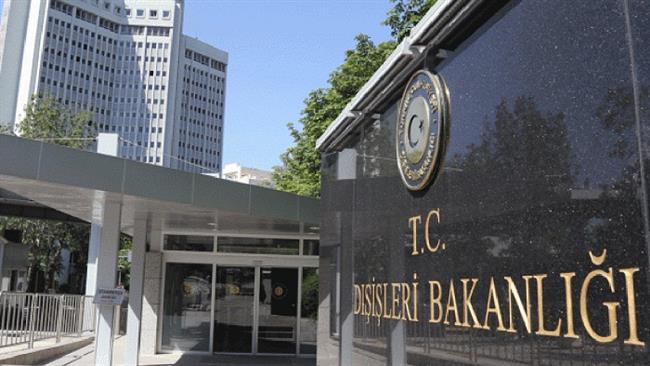 This file photo shows the entrance to the Turkish Foreign Ministry building in Ankara.

He, however, did not provide any information about the asylum seekers’ identities, positions or status of their applications.

Dimroth noted that the actual figure of the asylum seekers could be higher since diplomatic status is not generally part of the application.

The report comes as the Turkish Foreign Ministry recalled hundreds of diplomats in the wake of the botched putsch in the country.

Turkish authorities arrested Gurcan Balik (shown below), who served as the chief advisor to former Prime Minister Ahmet Davutoglu during the latter’s tenure as foreign minister, on August 18 for suspected links to the Gulen movement.

Bozdag went on to say that Turkey’s government is going to arrest another 3,907 individuals.

The senior Turkish official noted that some 82,000 people have so far been investigated in connection with the failed coup, and tens of thousands of them been suspended, dismissed or jailed.

A section of the Turkish military declared itself in charge of the country on the night of July 15. Renegade military personnel made use of battle tanks and helicopters to fight loyalists to the incumbent government in Ankara and Istanbul.

The coup attempt was later extinguished as tens of thousands of people flooded streets across Turkey to support President Recep Tayyip Erdogan and his ruling AK Party.

At least 246 people lost their lives and more than 2,100 others sustained injuries in the botched putsch.

The 75-year-old Gulen has censured the coup attempt and strongly denied any involvement in the violence.