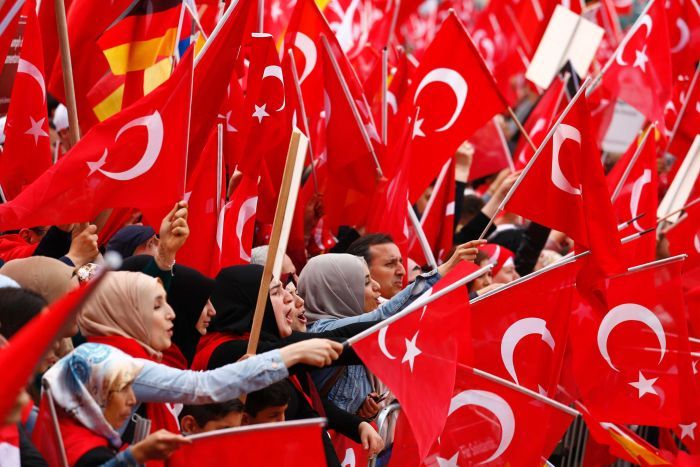 For weeks, he has suffered threats of boycotts.

His staff have been abused and called “traitors”, “terrorists” and even “sons of bitches”.

Like the 100,000 other German followers of US-based religious leader Fethullah Gulen, he is a prime target for harassment by supporters of Turkey’s authoritarian President Reccep Tayyip Erdogan.

From Berlin, Mr Celik watched the President’s furious crackdown on dissidents in Turkey with trepidation.

Many thousands have been imprisoned, and Amnesty International has reported claims of torture and rape, though these are staunchly denied by the Government.

Ankara has designated the pacifist Islamic movement a terrorist organisation, accusing it of building a parallel state within the country, aimed at seizing power.

Mr Erdogan has moved to rid the country of that threat.

“Erdogan describes what’s happening in Turkey as a second liberation struggle. He has called it a holy war,” Gulenist Institute for Dialogue and Education in Germany chairman Ercan Karakoyun said.

Few Gulenists will speak openly — including Mr Celik — who also asked the ABC to disguise his name.

“I can’t imagine what will happen when a lot of people return to Germany full of hate for Gulen followers.”

“We expect from people of Turkish origin, who have already lived in Germany a long time, that they develop a high level of loyalty to our country,” she said.

Turks began arriving in Germany as guest labourers in the 1960s to fill the gaps in the workforce resulting from the nation’s post-World War II development.

Many maintain strong ties to Turkey.

The majority of the more than 3 million-strong community fiercely support Mr Erdogan.

Thousands of flag-waving supporters swelled the streets of Berlin and other cities in the wake of Turkey’s failed coup.

“Erdogan sees Gulen as an enemy,” said Mr Karakoyun, who has been targeted by six or seven death threats.

“You [Gulenists] think you’re not safe in Turkey. You’ll soon find out you are not safe here either.”

Germany’s Gulen community is under siege.

Their institutes across Germany have been attacked, and a youth centre was stormed by about 150 club-wielding Erdogan supporters.

“We don’t want these kinds of conflicts to play out in Germany with violence in the streets,” he warned.

But the intimidation has continued. Several properties had windows smashed, while calls have gone out to boycott Gulen-related businesses.

Even at Friday prayers, they face abuse.

Levent Bayram, a Berlin-based social media executive, was in his local mosque when someone shouted at him: “I’m not prepared to pray with a terrorist in the room.”

“Many Erdogan supporters see it as Jihad,” Mr Karakoyun explained.

“As a result, they are threatening and insulting.”

But the threat is stepping up a notch.

Despite the increasing hostility and fear, Germany’s Gulenists are persevering with their projects, calling for peace and interfaith dialogue.

The Gulen movement is called Hizmet, meaning “service”. It aims to build a civil Islam through a series of educational centres, forums and schools in 160 countries around the world.

It is a driving force behind the House of One project under construction in central Berlin.

PHOTO: Model of the House of One interfaith centre, under construction in Berlin. (Andrew McCathie)

It will be the world’s first place of worship for three religions — Christian, Muslim and Jewish.

Mr Karakoyun is confident Turkey’s crisis will not threaten the House of One project.

“The dialogue has already begun,” he said.

While he remains very pessimistic about events in Turkey, he believes Gulenist ideas still have a future there.

“You can destroy all the buildings, but you cannot influence the thoughts and feelings of the people,” he said.