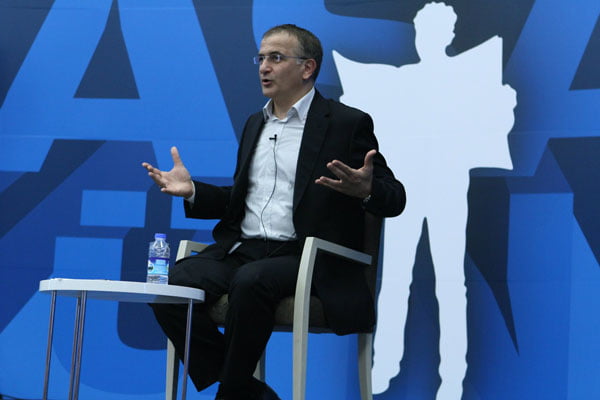 One Turkish folk song says: “Chests are piled up on each other / Woe to us, o gallant people / We have made a promise without thinking / We held you in high esteem although you did not deserve it.”

I have been repeating these lines for months. This song was obviously composed with profound disappointment and it faithfully portrays the current atmosphere in Turkey.

We held them in high esteem! Looking at their appearance and rhetoric, we were deluded. We thought they had Islamic sentiments as they marketed themselves as such. We assumed they had gentlemanly approaches as they were acting so as to give that impression. They appeared to be chivalrous and sincere.

Then an ominous wind started to blow out of nowhere to kindle and escalate the fire of dissension and masks were dropped. We saw that some of them did not have any trace of love or respect inside. What they had been nurturing inside for all those years was nothing but a cause for promoting self-interests.

Today, they have been manufacturing all sorts of lies and smear campaigns. They have long jettisoned their decency. Even those who marketed themselves as scholars or intellectuals are now using vulgar language, believing that they can become heroes with cheap bullying. So we observe that those sumptuous gowns and well-dressed postures served to conceal the ignorance of hooligans. A dispute has exposed their true nature, but the outcome has also done damage to the very cause they had been purporting to advocate.

We have witnessed ignorance and lowliness that has never been so widespread. Those who utter insults to be witnessed by millions of people or who voice accusations on live broadcast TV programs know that the response to those insults or accusations cannot be made on equal terms. For this reason, they continue to commit the cardinal sins of backbiting, gossiping, slandering and lying one after another without thinking about God’s wrath and punishment in the Hereafter. Can they talk to their addressees in the same setting and in the same conditions? They know they would be ashamed to get the proper response from their addressees. Speaking on my behalf, I would to like to tell those insult-mongers, “Watch your mouth!”

If you covet other people’s hard-earned property, you will eventually be punished by God before you die. If you treat innocent people as terrorists, you will not rest in peace in your grave. If you send people to prison with fake evidence and fictitious accusations, you will not sleep soundly at night.

Whoever you are, you don’t have the right to denigrate, humiliate or slander other people.

What about the injustice? Only the oppressed will answer questions about its existence. No oppressor sees himself as an oppressor. All oppressors have justifications for their tyrannical acts. It is up to the oppressed to decide if there is oppression. Today, the oppressed people believe there is gross oppression in this country. “We are fair people,” you may be saying, but it is not enough. You have to gather together and engage in a process of self-criticism.

The first thing to do in this direction is to watch your mouth. Watch your mouth, O oppressor! With that mouth, you don’t and cannot bring peace to this country. Your language does not comply with human or Islamic values.

Why does 50 percent hate you?

A statement Deputy Prime Minister Bülent Arınç made recently should be etched in history so that future researchers can use it in their studies. Arınç said: “We secure 50 percent of the national vote. But the remaining 50 percent hates us. This does not prevent us from getting 50 percent of the vote, but Turkey may become a country that is ungovernable.”

Arınç made the following assertion based on his observations. He said that in the past, when they mingled with people in the streets, their supporters would hail them and their opponents would show them respect. So what is the situation now? “Now, I can sense the hateful glances,” he said. It is a true observation.

Is this pessimistic picture a cause or an effect? It is certainly an effect. Its causes can be found in the harsh, demonizing language President Recep Tayyip Erdoğan uses. Unfortunately, Erdoğan targeted, attacked, hurt and even vilified everyone except his fanatical supporters. Just answer this question with a fair mind: Is there any social group that has not been humiliated by Erdoğan: Liberals, democrats, leftists, rightists, Kurds, Alevis and civil society organizations have all been victims.

Initially, there was no such language. Therefore, the Justice and Development Party (AK Party) was able to secure support from all social groups (and even from the international arena). As it took steps to boost the country’s democratization, the party was supported and received acclaim. Unfortunately, the world’s oldest rule started to apply to the ruling AK Party: “power corrupts.” Then came a calamitous intoxication with power.

Don’t you feel sorry about this grave picture? In every era, there have been people who did not like the president, but no one except Erdoğan has ever become the target of such profound hatred. It is upsetting. There is only a small group of fanatical supporters; all fair people say: “This is too much. This harsh and mean-spirited discourse cannot continue.” This criticism is voiced in whispers, but when it engulfs groups that have historically been antagonized by Erdoğan, it amounts to strong hatred. This is no longer a matter of love or hate; it has turned the country into an unmanageable one.

Actually, there were good opportunities that were wasted. When he became president, Erdoğan could have kept his promise to be impartial and emerged as an apolitical actor. As prime minister, Ahmet Davutoğlu could have acted more independently and eliminated the polarization. But while he may never have supported polarization, he has simply maintained his intellectual personality. For this reason Arınç criticizes him as well. He surely has a point.

I don’t know if it is already too late. If they pay heed to Arınç’s observations, they may find a solution and rebuild bridges with the rest of society. Otherwise, hard days are ahead for the architects of polarization. Just remember the striking examples from our recent past. “This is what destroyed the Motherland Party,” Arınç said wisely.

“The Gülen movement is worse than the Kurdistan Workers’ Party [PKK],” Erdoğan told a group of journalists. This is cruel! “The Gülen movement did greater damage to the country,” he says. This sentence does contain any trace of truth in it, but betrays a profound grudge and incurable hatred and the potential for limitless violence.

The PKK is an armed terrorist organization. It killed thousands of soldiers, police officers and innocent citizens (including Kurds). It is said that it is Erdoğan himself who is directing the negotiations being conducted with the PKK.

The Gülen community existed before Erdoğan even started his political career. It has been conducting its humanitarian services all around the world with a neutral, democratic and peaceful identity. No one should covet it; no one should try to replace it with good-for-nothing organizations. Any entity that lacks the ability to develop novel projects tries to consume already existing projects. The result will, of course, be disappointment.

All the irrational assertions and brainwashing efforts about the Gülen movement are actually promoting the movement’s recognition in the international arena. The attempts to scare people are futile. No member of the Gülen movement is afraid of oppression. What certain people fail to understand is that these fearless people do not exhibit their courageous stance just for show; it is because they don’t expect to be rewarded for their acts in this world.

“The Gülen movement is worse than the PKK” is an unfortunate assertion. When the dust settles, such remarks will be examined in depth and everyone will be held accountable for their acts and words. “Be fair,” cries any sensible person.