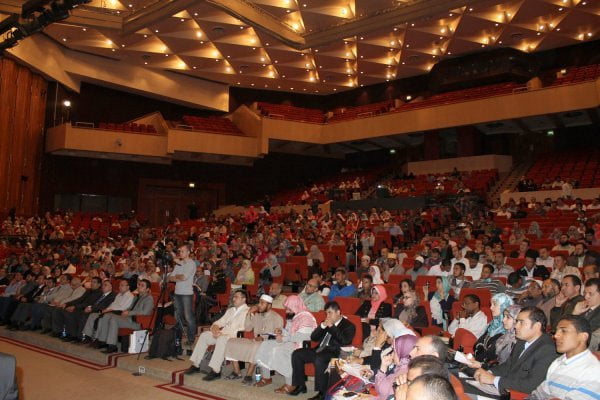 In the three conferences held in three different cities in Egypt, the Egyptians, especially youngsters and students, flooded the conference rooms in order to understand the “Hizmet Movement” (aka Gulen movement) and Fethullah Gulen.

Especially in the third and last day of the conference that was held in the world-wide famous Alexandria library in Egypt, the Egyptian and Algerian participants led to the unforgettable moments, by telling not only about how they met with the Hizmet movement, but also by offering their opinions about the reasons why the movement spread around the world fast.

I was introduced to Gulen by an American: I was too late.

Dr. Muhammad A. Sharkawi, Professor and Head of Department of Islamic Philosophy and Comparative Religion, Cairo University told at the conference titled “From man of horizon to ideal society” about how he met the Hizmet movement through an American professor, Dr. Jill Carroll, who is known for her work on Fethullah Gulen.

Dr. Sharkawi, who expresses that he as a philosopher had found it barely possible for Turkey to raise such a man of science and culture as Gulen, regrets for having met him that late especially after reading more than 20 of his works, which were translated into Arabic.

Dr. Sharkawi told an interesting incident that he experienced in Germany: “During a conference one of the participants asked me ‘You are talking about the horizon and superiority of your religion, then why are you in this [bad] situation?’ My answer was that, pointing to the Hizmet movement without any doubt, whoever wants to see how Islam is being represented could look into this movement”.

According to Dr. Sharkawi, Gulen, who might be viewed as a philosopher, educator, re-builder of the human civilization and a reformer, is actually a mujaddid. Prof. Sharkawi also stresses that Gulen understands and recounts the religion very well- in its entirety and with its details.

Mustafa Ozcan, the president of the Board of Trustees of Hira Journal, which is in Arabic, stated that the interlocutor of Islam is the human heart, and the goal of Islam is peace both in this world in the hereafter, and he reminded of the fact that Prophet Mohammed (pbuh) started his mission of change not from the economy or governance but from human hearts.

Ozcan further emphasized that the Prophet did not mobilize hearts by force but tried to educate the minds and souls throughout 13 years He spent in Mecca. Ozcan commented that humanity was attacked by positivist ideologies and Muslims failed against them, as Islamic thought was not represented thoroughly. These ideologies raised humans according to their ideals.

Ozcan said, “Those humans who were morally selfish, individualist in material, and racist in human relations, became aggressors and did not let other people live”, These kinds of people have turned the world into a pool of blood in the last three centuries, according to Ozcan. He continued to state, “These ideologies went bankrupt. The kinds of people that these ideologies brought up also went bankrupt and become unlikeable. 7 billion people are in search for a model, modesty against selfishness; there is a need for human model that will live to let others live. Gulen is in pursuit of finding out how these principles can reach out to all humankind.” Ozcan also stresses that Gulen’s strategies are built upon tolerance, acknowledging everyone as who they are, representation and the art of living together.

The Hizmet institutions open to novelties

The Algerian scholar Dr. Muhammed Baba Ammi states that the most obvious feature of the Hizmet movement is that it establishes a fine balance between this world and the hereafter. Describing the Hizmet movement as unique, Dr. Baba Ammi points out that Gulen always attributes all successes to God and he is neither egocentric nor movement-centric.

Dr. Baba Ammi not only explains why the schools and institutions that have spread out to more than 160 countries all over the world have become successful, but highlights that these enterprises have always been open to novelties and carried out different experiences to those countries as well.

The moderator of the conference Dr. Salah Suleiman, who is the assistant director of Alexandria library and a professor at Alexandria University, expressed that he read Gulen’s all works in Arabic and the most obvious thing in his works is that he cites or points to Prophet Mohammed frequently.

The series of conferences in Egypt started on Friday with a widely participated meeting to introduce the book ‘The Essence of Islamic civilization,’ which consists of the essays that were published in Hira journal by Egyptian scholar Mohammed Imara.

On the second day, a program was held in a city called Beni Suwaif, almost 150 km south of Cairo, to open the second Turkish school in Egypt with the participation of Dr. Ali Gomaa, the Grand Mufti of Egypt, and all the leading people of the city.

Gülen touched in his letter to the forum :The principle of objectivity in the media, which he said is often violated worldwide. “Adopting this principle and reflecting this principle in stories require a strong character, a strong culture, a sense of responsibility and an understanding of putting national interests above anything else.