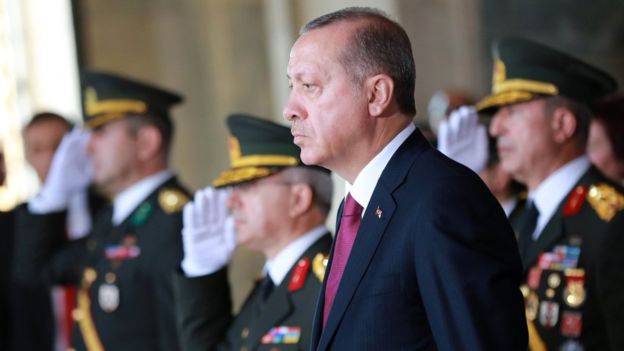 They are just visible on the white stone entrance: the outlines of letters that once spelled out “Fatih University”, removed after the attempted coup.

Students wait outside the closed gates to find out where they have been reassigned, their alma mater now designated a “terrorist institution”.

Fatih is one of 15 universities closed down since 15 July for having links to Fethullah Gulen, the cleric who the government alleges masterminded the coup and who lives in self-imposed exile in Pennsylvania.

His educational movement opened schools and universities across Turkey and in 140 other countries from the 1980s.

Now anybody with alleged links to him or the failed takeover is being rounded up in the biggest purge in Turkey’s modern history.

Some 100,000 people have been dismissed or suspended, 70,000 detained and 32,000 arrested: from teachers to soldiers, police to judges, aircraft pilots to journalists. Even the country’s most famous baklava chef was interrogated. The depth of the purge is staggering.

Nilufer Demircioglu was in her final year of chemistry studies at Fatih University when it was shut down. Of the 14,000 students, some have already been moved – many to universities far from their homes. But with an administrative backlog, she is still waiting to hear if she can complete her course and fulfil her dream of working in a laboratory.

“I never followed Fethullah Gulen,” she says. “I enrolled here because I was given a scholarship and it was close to my home. Our political leaders used to come here and promote this university. Now they have stopped me from finishing my studies.” 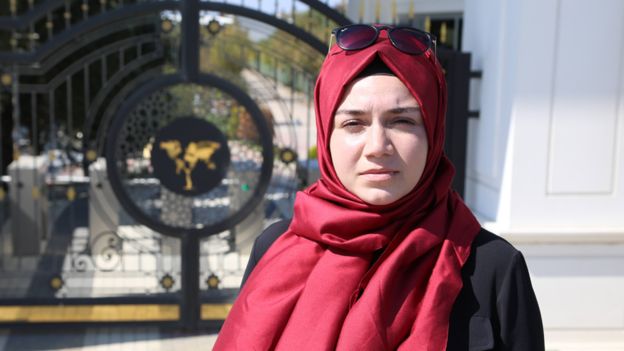 Is she afraid of being forever labelled “Gulenist” due to her university, I ask?

“Everyone is scared that they won’t be employed if they have the name of this university on their diploma. Former graduates have even been fired.”

But from 2013 they fell out badly. Gulen followers within the police and intelligence services were blamed for orchestrating phone leaks that appeared to implicate Mr Erdogan and his inner circle in corruption.

Many now being rounded up in the post-coup purge say those in power never complained of Gulen’s influence when they were using it for their own means.

But the purge has spread beyond suspected “Gulenists”.

Under the post-coup state of emergency, special decrees are netting all those accused of backing “terrorist groups” – a label considered so broad that the EU is insisting Turkey should narrow it if Turks are to be granted visa-free travel to Europe.

The state has targeted 1,100 academics who signed a declaration calling for a halt to Turkey’s conflict with the PKK Kurdish militants – and accusing the government of “massacres” in Kurdish areas.

Derya Keskin, a sociology professor, is among those fired from Kocaeli University and expelled from the public service.

“The Gulen movement is against everything we stand for: democracy, justice, secularism and peace,” she tells me.

“But since we signed the peace declaration, the university administration wanted to get rid of us. If there is no free thinking or free speech, there can be no science or democracy. The government wants to get rid of everybody who doesn’t obey them.” 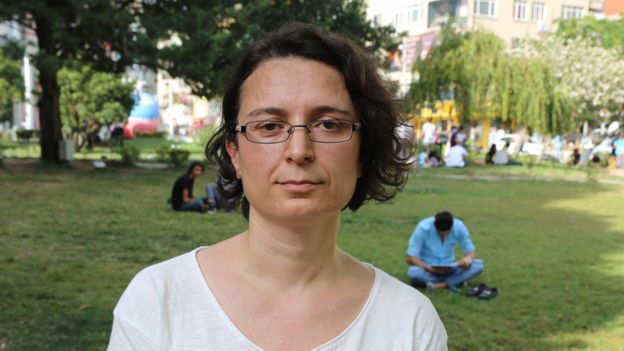 President Erdogan has defended the purge, saying Turkey “needs time to clean up the extensions of these terrorist organisations”.

But he has also acknowledged that some innocent people may have been unfairly caught up in the arrests, and Prime Minister Binali Yildirim has now talked of crisis centres being established to handle claims from those unjustly accused.

“It is absolutely correct to pursue the arrests and dismissals,” says Enes Bayrakli from the pro-government think-tank SETA.

“There might be some mistakes but there will be mechanisms to correct those problems. We must understand the threat Turkey is facing.”

Any supposed link to Gulen-affiliated bodies is being scrutinised, such as deposits in the Gulen-linked Bank Asya.

More apparently outlandish connections have been alleged by the government, such as carrying a one-dollar bill, which it says denotes support for the movement.

The “Gulen” label is being widely bandied about. Even I was accused of being “Gulenist” and “close to Pennsylvania” by the pro-government columnist Mehmet Barlas for an article I had written about Mr Erdogan.

But Enes Bayrakli rejects claims of a witch hunt. “A terrorist organisation doesn’t just have one dimension,” he tells me. “It has an armed section but also a propaganda section. To take it down, you have to address all these issues.”

The terrorism charge is being levelled at pro-Kurdish writers, such as the award-winning novelist Asli Erdogan, in prison since mid-August. She was arrested for columns she had written for the pro-Kurdish newspaper Ozgur Gundem, on whose board she also served. A diabetic, she has complained of ill treatment in detention. 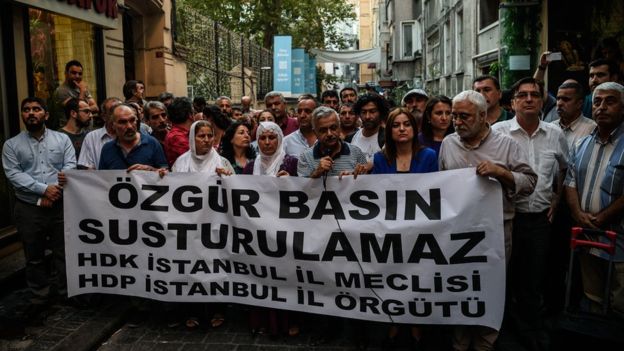 “By arresting Asli Erdogan, they’re trying to threaten Turkish intellectuals not to confront the Kurdish issue or criticise the government’s security measures,” says her lawyer Erdal Dogan. “The government is using the coup to hush up its critics. It’s not explicable within the legal framework.”

President Erdogan says the state of emergency might be needed for another year to crush the “terrorist” threat. More than 130 media outlets have been shut down, the pro-Kurdish IMC TV the latest victim.

The authorities have started releasing 38,000 prisoners, to make way for the new arrests.

Turkish society is undergoing its most dramatic reordering in decades. An emboldened government has a free hand. And there is little sign that it is loosening its grip.