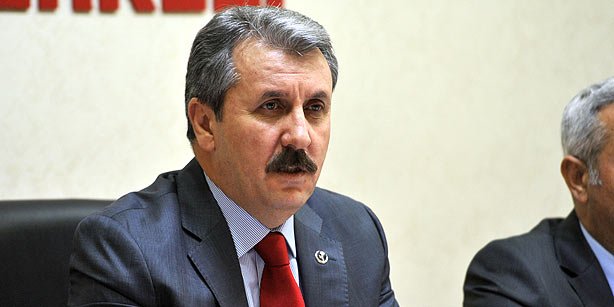 İSTANBUL
Grand Unity Party (BBP) leader Mustafa Destici, speaking about an ongoing corruption operation and the government’s response to it, said on Sunday that everyone has a responsibility to respect the laws in the country and that efforts to change the laws to protect a certain group of people from accusations are unacceptable.

In the wake of a corruption operation which has extended to several ministers and their sons, the Justice and Development Party (AK Party) government, which views the investigation as a “dirty operation” to topple the government, has removed hundreds of police officers who took part in the operation from their posts, leading to claims that it is obstructing the investigation from proceeding.

Making a press statement ahead of his party’s Central Decision and Administration Board (MKYK) meeting at the party headquarters, the BBP’s Destici said: “What needs to be done here is not intervening in the job of the police and the judiciary or removing police officers from their posts. There is no end to this. It was you [the government] who appointed those policemen. It was you who established the judicial system you are complaining about today. If the new ones you appointed today act in the same manner tomorrow, will you also remove them from their posts? The right thing needs to be done. Everyone should respect the current laws and not try to evade them. No one should attempt to change or discredit laws in order to protect themselves.”

He said the laws in advanced democracies do not change according to events, time, persons or governments and that everyone is equal before the law.

‘Be acquitted or be held accountable’

Pro-Kurdish Peace and Democracy Party (BDP) Diyarbakır deputy Altan Tan on Sunday called on Prime Minister Recep Tayyip Erdoğan to respond to the corruption allegations which his government is allegedly involved in, saying if these allegations are untrue, his government will be acquitted sooner or later.

Speaking to the Cihan news agency, Tan said many politicians and their relatives have been prosecuted in Turkey due to claims of involvement in corruption and that it is not a new thing for some politicians to be facing corruption charges in the country.

“Whoever was involved in such business [corruption] in Turkey was tried and investigated, and most of them were punished. Now, you [Erdoğan] are facing similar accusations. If you are right, you will be acquitted sooner or later. If not, you will be held accountable for your actions. … You just need to respond to these accusations,” Tan said.

Concerning Erdoğan’s claims that the US, the UK, Europe, Israel and the Hizmet movement are behind the corruption investigation and that their aim is to topple the government, Tan said these groups have been supporting Erdoğan for the past 11 years and that he needs to explain why they withdrew their support from his government.

“Why have you [Erdoğan] been brought to power and why are you now being toppled? You just need to explain this but you don’t,” he said in further remarks.

In the meantime, Felicity Party (SP) leader Mustafa Kamalak, who also shared his views about the ongoing corruption operation, said on Sunday that it is unacceptable to “present those individuals claimed to be thieves as innocent and those who detained them with an order from the prosecutor as criminals.”

Speaking at a meeting of his party, Kamalak said the best way to clear oneself of corruption charges is to allow the judiciary do its job, directing criticisms at the government for meddling in the corruption investigation.

Meanwhile, the house of a woman who held up a shoebox during a meeting of Prime Minister Erdoğan in Akhisar town in Manisa province on Sunday in protest of the government’s alleged involvement in corruption was raided by Erdoğan’s security guards.

Shoeboxes have become a symbol of the ongoing corruption investigation as a huge amount of money was discovered hidden in shoeboxes in the house of state-run Halkbank’s general manager.

The woman, Nurhan Gül, was detained by Erdoğan’s security guards.