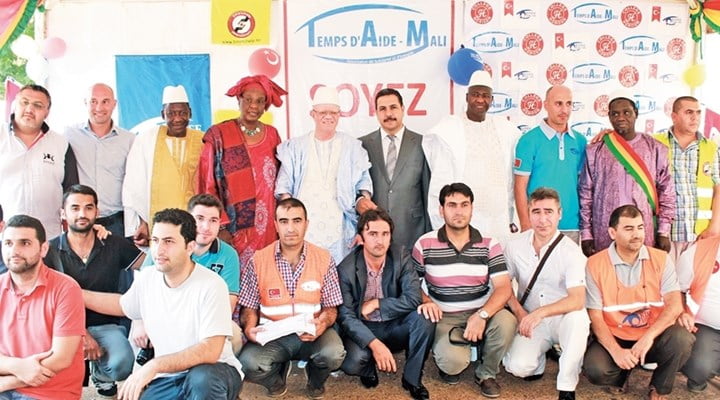 “We embrace your brotherhood, and it will continue at the same level,” Mali Labor Minister Bocar Diarra pledged on Saturday.

Mali high officials who attended a charity handout for sacrificial meat, organized by Kimse Yok Mu, spoke highly of the aid organization and the Hizmet movement.

“We are familiar with Gülen Movement’s sharing philosophy,” Diarra said. “You could celebrate Eid with family and loved ones in Turkey. We are satisfied with your brotherhood and we embrace it.”

Islam is not only having about mosques

Three Mali ministers and high officials, a guest from Turkey and from Europe met at the charity event, which was sponsored by the Horizon College in Mali, Yardım Zamanı Derneği of Mali and Yardım Zamanı of Europe aid organizations.

While he was the Minister of Education, Diarra said he had the opportunity to work together with the Horizon College Turkey school, and on this occasion he had a chance to know more about the influential Islamic preacher Fethullah Gülen.

“I read Gülen’s books. Here, I observe that all beautiful deeds and sharing are inspired by Gülen’s ideas and philosophy. I witness the sharing and tolerance in this religious movement. Islam is not having about only mosques, the school also has an important place in Islam,” he said.

Turkish schools are our most powerful connection with Turkey

“I’d like to send my gratitude to organizers of this organization. Turkish-built and funded schools in Mali is Mali’s future and they contribute to us good things”

Kimse Yok Mu volunteers handed out sacrificed meats to 37,000 families in capital Bamako, and in five different provinces of Mali.

Mali is considered to be a poor country among African countries. 65% of its land area is desert, and about 70% of the population is employed in farming and fishing.

Toni’s Kitchen in Montclair was the benefit of 150 pounds of meat recently donated by Peace Islands Institute. The annual donation is in celebration of the Muslim festival of Eid-al-Adha, which took place Aug. 21 to 24.