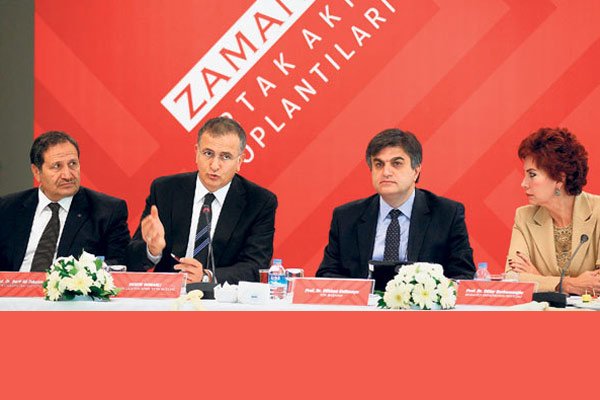 Participants of a meeting hosted by the Zaman daily have called on the Higher Education Board (YÖK) to grant universities broader freedoms instead of the existing centralized structure under a new YÖK Law.

The current YÖK Law is considered outdated and carries traces of former coups as it was launched right after a military takeover in 1980. Turkey had 27 universities in 1980 when the law was enacted, compared to the more than 160 universities currently established. YÖK plans to replace the law with a newer, more liberal one.

The Zaman daily hosted an event, “Ortak Akıl Toplantısı” (Common Wisdom Meeting) on Saturday to discuss the new law with experts from various circles, including rectors, academics, civil society representatives, businessmen and YÖK members. Participants mainly complained that the country’s universities have a centralized structure under the existing YÖK law, and the structure should be replaced with a more liberal one under the new law.

In early November, YÖK opened a draft bill for public discussion. With the new law, YÖK plans to diversify universities and transform them from monotype to diversity. According to the draft bill, rectors of universities will be elected by members of the board. Currently rectors are appointed by the Turkish president from a pool of candidates selected by members of each university. The draft bill also suggests that students and civil society organizations will be represented in the board.

The Zaman daily’s Editor-in-Chief Ekrem Dumanlı expressed his opinion that the meeting would contribute to the drafting of a better law by YÖK. “We hope that Turkey will have freer universities. We want universities to be more open to sciences, arts, literature and thought,” Dumanlı noted.

YÖK President Gökhan Çetinsaya, in response, said the intention of the board is not solely to replace its law. “YÖK also wants to transform universities into places that meet the needs of Turkey and the world in the 21st century. We are mainly focusing on diversity. This is a response to the [current] monotype,” he stated.

Professor Durmuş Boztuğ, the rector of Tunceli University, said the new law would allow national will to be represented and reflected in universities as some YÖK members would be appointed by the president, who is elected by the people. “I think the new law will contribute to the autonomy of universities,” he added.

Under the new law, the name of the board will also change. The bill proposes to change the name of the institution to the Turkish Higher Education Board (TYÖK). This is also open for discussion.

Yeşildere also said the new law should provide broader freedoms to academics. “Freedom of academics is a must for universities to function properly,” he added.