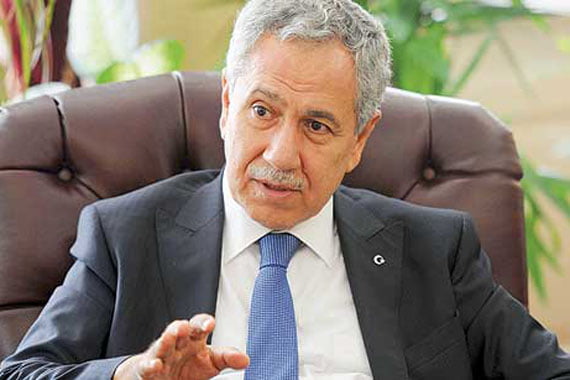 Deputy Prime Minister Bülent Arınç in remarks made on Tuesday said the government does not need to get into a verbal row with the Hizmet movement. (Photo: Today's Zaman)

Arınç said Fethullah Gülen, the Islamic scholar who inspired the Hizmet movement, is not a political figure. “The movement might have different political opinions or lifestyles in the movement, but [what matters is] that there’s unity in the movement.” Arınç praised schools opened across the world by the movement and continued: “They are especially strong in the media. All they are trying to do is to benefit our nation, Turkey, the Islamic world and the entire humanity. I believe this, not everybody has to agree with this. There will of course be a problem of a movement that has grown to such an extent.”

He continued: “The more you grow, the more people you will have seeking to join you and they might produce results that are in line with their own agenda. This is how it always is.” He said the AK Party is not an ideological party, but rather a party of the masses. “We are a party that has 21,500,000 votes. We have 355 potential candidates in a province that sends 16 deputies to the Parliament. It is a strong party, it will come to power again and everybody is drawn to the strong one. This also goes for social movements.” He said religious groups called tarikats and religious movements are a “reality” of Turkish politics.

He said Gülen likes the government, Prime Minister Recep Tayyip Erdoğan and President Abdullah Gül very much. “He always says that he prays all the time expressing his gratitude because such a brave, determined and principled party did all these. He is always advising the movement to work for the democratization of Turkey. Today, we [as the government] are doing what we are doing from the strength we have drawn from the Sept. 12, 2010 referendum [on constitutional changes]. This is how we are able to bring to justice the perpetrators of the Sept. 12 or Feb. 28 coups.”

He said Gülen has openly supported the AK Party in the elections. “It is wrong that some of us speak against this movement which is very supportive of our government and our positive efforts. We should prevent such things. Hoca Efendi [the title for Gülen] resides in America. He can live in Turkey if he wants, it’s his own decision… We don’t need to get into a verbal row through the media that might hurt relations between the movement and the government, this would hurt us. Because it is not a political entity.” He also said Erdoğan holds Gülen in esteem.

The preparatory tutoring schools of the Hizmet movement perform an important sociocultural function. They serve as a barrier in the way of this destructive, postmodern culture that erases all identities. They protect our children from “filth” and endow them with moral values. If any educational institution needs shutting down, it should be the state schools.