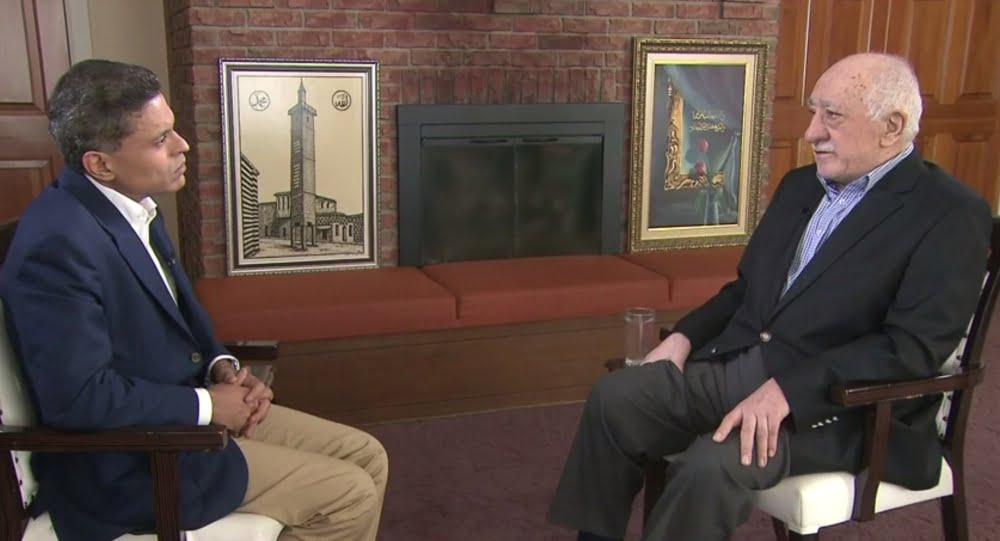 The Muslim cleric being blamed by Turkish President Recep Tayyip Erdoğan for masterminding a bloody coup attempt says “ultranationalists” were behind the plot in a “scenario” that looked “more like a Hollywood movie” than a military uprising.

In an interview aired Sunday on CNN’s “Fareed Zakaria GPS,” Fethullah Gulen, living in self-imposed exile in Pennsylvania, denied having any direct connection with those who plotted the coup attempt.

He suggested that the immediate arrest or firing of thousands of Turkish officials showed that Erdogan had planned such a move, and was waiting for a pretext.

Gulen is a moderate Islamic theologian and preacher who leads the Hizmet movement, which opposes Islamic extremism, jihadism or terrorism in any form. The group has held enormous influence in Turkey’s public bureaucracies, and has pushed for stronger ties between Turkey and Europe as well as NATO.

“If there is anyone I told about this verbally, if there is any phone conversation, if one-tenth of this accusation is correct, I will band my neck and say, ‘they are telling the truth, let them take me away, let them hang me.'”

“I have neither talked to anyone, nor did I say anything to anyone on the phone,” he insisted.

According to The Washington Post, Turkish leaders are stepping up their calls for the United States to detain and deport Gulen to Turkey for his supporters’ allegedly being behind the failed July 15 coup attempt.

On Sunday, Gulen said, “They (the Erdogan government) will do whatever it takes, but if they could provide evidence for one-tenth of what they have been claiming and take me back by force, there is not much I can say about this.

“What matters is whether or not they can do this by means of law, and I don’t think this will happen with the will of God,” he said.

Gulen speculated about “ultranationalisst” behind the attempt.

“According to some… ultranationalists have planned this and they put some religious-appearing people at the front in order to demonize them, with the idea that such a scenario would receive grassroot public acceptance,” he said.

Gulen also mocked the idea those in the military, bureaucracy and the judiciary loyal to him might be trying to destabilize the Turkish government, and suggested a “state scenario.”

“I don’t think it is possible … some people stated a scenario, then someone who’s seemingly a fan has led some people into this,” he said. “It looks more like a Hollywood movie than a military coup.

“It seems something like a state scenario… from what is being seen, that they have prepared the ground for what they have already planned,” he added.

Gulen and President Erdogan had once been allies. But the two broke as Erdogan began taking steps to undermine Turkey’s democracy and constitution. Since taking power, Erdogan has fired or arrested most of the country’s senior military staff.

He has also embarked on a systematic effort to squelch political dissent. Hundreds of journalists have been arrested in recent years, making Turkey the most repressive of media in NATO.

Gulen conceded some supporters might have been among the rebels.

“I would curse people who resort to coups against democracy, liberty and republic,” he declared.