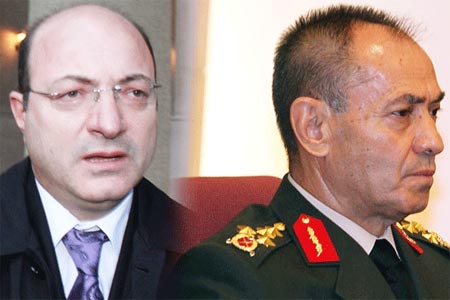 Fourteen suspects, including retired Gen. Saldıray Berk and former prosecutor and current Republican People’s Party (CHP) deputy İlhan Cihaner, put a subversive plot known as the Action Plan to Fight Reactionaryism into operation in Erzincan between 2009 and 2010, according to an indictment accepted by the Supreme Court of Appeals on Friday.

The Action Plan to Fight Reactionaryism, which was exposed by the Taraf daily in 2009, details a military plan to destroy the image of the ruling Justice and Development Party (AK Party) and faith-based Hizmet (Gülen) movement in the eyes of the public, play down the Ergenekon investigation and gather support for members of the military arrested as part of the investigation into Ergenekon, a clandestine criminal network charged with plotting to overthrow the government. The action plan — which included schemes to frame innocent people linked to the Hizmet movement and the AK Party through methods such as planting arms and ammunition in their homes — sparked outrage in large segments of society as it was widely regarded as concrete proof of the military’s plans to intervene in the civilian realm. The plot is believed to have been prepared by former Col. Dursun Çiçek, who is currently in prison on coup charges.

The trial of the two suspects, retired Gen. Berk and CHP Denizli deputy Cihaner, will be heard by the 11th Criminal Chamber of the Supreme Court of Appeals. In addition to being charged with membership in the Ergenekon terrorist organization, the suspects face charges of forgery of official documents, threatening people and illegally storing personal data. The 11th Chamber of the Supreme Court of Appeals in April of last year decided to send a case file in which Cihaner was accused of membership in a terrorist organization to the Justice Ministry. The indictment prepared by the Tunceli Chief Public Prosecutor’s Office said the suspects in the case put the action plan, which forensic tests revealed to have been prepared by Çiçek, into motion in Erzincan between 2009 and 2010 to achieve the goals of the Ergenekon terrorist organization.

A high criminal court in Tunceli decided that Cihaner and other suspects in the case should stand trial on charges of “abuse of power” and “falsification of documents,” which call for up to 26 years in prison.

The Tunceli court also ruled that it is out of the question for Cihaner to avoid prosecution due to parliamentary immunity because it is not possible to talk about parliamentary immunity when suspects are involved in a crime heard by high criminal courts with regard to terror changes as set out in the 14th Article of the constitution.

A specially authorized prosecutor in Erzurum, Osman Şanal, launched a probe into Cihaner in 2010, arguing that Cihaner was working to put the action plan into operation in Erzincan.

According to the plot, religious communities would be presented to the public as “terrorist organizations” through subversive plans. Members of the military were to plant weapons and ammunition in the homes of followers of certain religious communities. Police raids on these addresses would result in the arrest of those individuals.