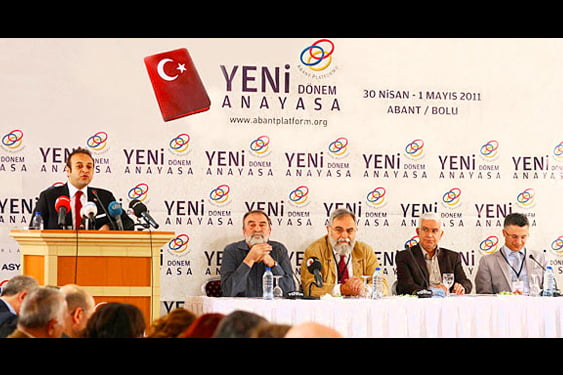 A meeting of the Abant Platform organized by the GYV, with (L-R) Egemen Bağış as the speaker and Murat Belge, Mete Tunçay, Atilla Yayla and Osman Can as the other panelists.

Nestled behind a grove of trees in Altunizade sits the Journalists and Writers Foundation (GYV), which works to span the Eastern and Western worlds much like the Bosporus Bridge.

“Turkey is in the unique geographical position of being located between the Eastern and the Western worlds,” said GYV President Mustafa Yeşil, adding: “It literally is a bridge between the cultures and religions of the East and the West.

We [GYV] have played a major part in building and maintaining that bridge.” The GYV strives to defeat three global injustices — poverty, ignorance and conflict — through aid, education and dialogue.

The GYV was founded in 1994, and the mission and work of the foundation is inspired by GYV Honorary President Fethullah Gülen. Gülen, known for his teachings of hizmet (service), tolerance and dialogue, has attracted a large number of supporters in Turkey and Central Asia and increasingly in other parts of the world.

This Turkish nongovernmental organization achieves its vision of national and global unity through its five independent platforms and research center.

These independent platforms each specialize in a different field, contributing to both the GYV’s and Turkey’s intellectual wealth. The Abant Platform, a think tank named after Lake Abant, the location of its first meeting, is now a very important platform  where Turkish intellectuals from all segments of society discuss recent issues and the country’s most pressing problems.

The Medialog Platform was founded by and brings together the media and academics to produce a meaningful discussion of important issues in the world of journalism.

The “Covering Turkey” forum, for example, continues to draw much interest and participation. The event looks to pose questions and challenge prejudice.

Medialog Platform Secretary-General Erkam Tufan Aytav recently authored the book “Türkiye’de Öteki Olmak” (Being an Other in Turkey) on groups that are discriminated against such as Kurds, Roma, Alevis and women who wear the hijab (headscarf). During the book launch a panel of individual contributors shared their experiences of being an “other” in Turkey and fielded questions from audience members on this very contested issue.

“Actually, I didn’t say anything new in the book. I simply underlined the ‘otherness’ issue and tried to instill empathy in my readers,” Aytav said.

This fall, Aytav said that the platform intends to tackle the “non-Muslim issue” in the media. Unfortunately, in Turkey, whenever there is negative reporting in the media there is a tendency to focus on the subject being a non-Muslim, Aytav explained.

The Dialogue Eurasia Platform is a regional intellectual department that organizes events to further develop dialogue based on the belief that a lack of communication and understanding is the main source of global conflicts today. This platform also publishes an intellectual journal in the Turkish and Russian languages.

Straddling both the Asian and European continents, Turkey was a suitable location for the birthplace of the Intercultural Dialogue Platform.

One such program includes monthly “Understanding Each Other” seminars. Intercultural Dialogue Platform Secretary-General Ahmet Muharrem Atlığ said these events allow people to break down walls and get to know one another.

Unfortunately Atlığ was forced to cancel the platform’s most recent event, the Coexİstanbul Peace Concert, because of protestors and threats of violence.

“From this perspective, the research center has a very important place,” he said.

Tuncer also said the center organizes many panel discussions, conferences, seminars and programs throughout the year.

The library at the research center gathers written documents and visual media in relation to Gülen as well as the foundation’s activities. The wide range of languages found in the library is a testament to the work of the foundation and global scale of the Gülen movement.

Tuncer said the research center is currently working on an online database of all the literature about the movement available in the library, making its research much more accessible. “About 50,000 documents and media can be found in the digital library,” he said.

“What’s next?” mused Tuncer. “We are planning to organize a Gülen Movement Conference — similar to the ones in Britain and the US — next year in Turkey. That will be huge.”

Four large programs are in the works for next year. The platform plans to produce a documentary that will focus on the role of mothers in important matters facing Turkey, such as the Kurdish issue. Another program will delve into the state of children, their rights and the role of the media. The platform will also tackle the issue of prejudice in South Korea with university students from both Turkey and South Korea. A trip followed by a documentary on visiting the holy places in Damascus, Mecca and Medina will also take place next year.

Özer, using a bridge metaphor to describe the platform’s work, said: “We must build a bridge without any hidden agendas. We must meet people where they are.”

The Abant Platform is an independent think tank that gets its name from Lake Abant, the location of its first meeting. Turkey’s intellectuals have been coming together every year since 1998 for the Abant Platform Meetings, the most well known of the foundation’s programs. Concluding declarations, issued after each meeting, are a culmination of compromises reached on important, often divisive, issues.

The Abant Platform recently brought together journalists and intellectuals to discuss the historic June 12 general elections. The group called for reconciliation in this June 12 Elections Evaluation Meeting on subjects such as the Kurdish issue and the drafting of a new constitution.

What began as a small foundation focused on communication among its own people is now an influential international actor in Washington, D.C., Brussels, Paris, Cairo, Moscow, Iraq and various Asian countries.

Yeşil said that perhaps the greatest evidence of the impact of the foundation lies not in its programming or global reach but in the feedback it receives from the external community.

A judge from Ankara, who preferred to remain unnamed in accordance with Ministry of Justice policy, reflected on the foundation and its contributions to society: “The vast majority of Turkish society appreciates their efforts. As far as I have observed, they try to establish commonalities.”

Like Yeşil, the judge defined the vision of the foundation as peaceful coexistence. “Picture this. There are people who share the same house,” he began, adding, “Although everyone does what he pleases in his own room — yoga, study, drugs, prayer — they must also find common and agreeable ways to live in harmony and in peace.”

And on the foundation’s contribution to the world, the judge focused on breaking down stereotypes. “They try to present decent Muslims to the world by exemplifying that the al-Qaeda terrorists cannot represent Muslims,” he said.

The foundation opens its doors to 4,000 guests every year from countries around the world.

“These visits are important,” said Yeşil, adding: “We establish a common ground. And in the process, we are sharing and learning about one another.”

A group of American professors and journalists from Louisiana only three weeks ago made such a trip.

Professor Robert Mann from the Manship School of Mass Communication at Louisiana State University had this to say about his third trip to the foundation: ”Every time I visit the foundation — three times now — I’m even more impressed with the depth of its commitment to fostering meaningful dialogue among nations and cultures.”

Reflecting on GYV‘s contribution to world peace, Mann added: “I believe the foundation really has identified the key components of world peace — greater dialogue and deeper understanding among the people of our various nations and cultures.”