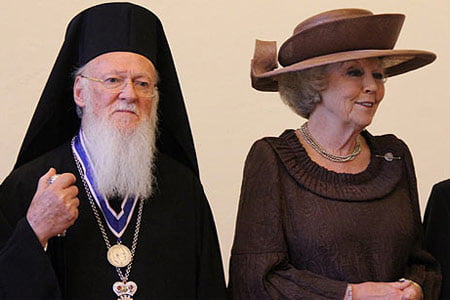 Greek Orthodox Ecumenical Patriarch Bartholomew poses to cameras with Dutch Queen Beatrix after receiving one of a Roosevelt Institute's Four Freedoms Award on May 12, 2012. (Photo: Cihan)

Greek Orthodox Ecumenical Patriarch Bartholomew praised well-respected Turkish Islamic scholar Fethullah Gülen for his peace efforts around the world after receiving one of the Roosevelt Institute’s Franklin D. Roosevelt Four Freedoms Awards. The award ceremony for the 2012 Four Freedoms Awards was held on Saturday at the Nieuwe Kerk in Middelburg, the Netherlands, with the attendance of Dutch Queen Beatrix and Prime Minister Mark Rutte.

Bartholomew was among the recipients of this year’s Four Freedoms Awards, which are presented each year to men and women whose achievements have demonstrated a commitment to those principles which President Franklin D. Roosevelt proclaimed in his historic speech to Congress on Jan. 6, 1941 as essential to democracy. The awards were founded to celebrate the four freedoms espoused by Roosevelt in his speech: freedom of speech and expression, freedom of worship, freedom from want and freedom from fear.

Upon receiving his award, Bartholomew said he was dedicating the award to his “church, patriarchate and country.”

Speaking to Turkish media after the awards ceremony, Bartholomew said he thinks the award he received is a message of peace for Turkey and the world. “All of the recipients are working for peace and friendship. All of them contribute to peace: I as a man of religion and the other as a politician. The Indian lady is fighting poverty. I am honored to contribute to these beautiful efforts. I am thankful to the Roosevelt Institute,” he said.

The patriarch also said he attended a meeting of the Journalists and Writers’ Association (GYV), of which Gülen is the honorary chairman, in İstanbul last week and stated that Gülen also contributes much to world peace. “We have been working with these friends [from the GYV] for long years. We are very close to each other as we share the same ideals: peace and unity. We appreciate their service for education. Fethullah Gülen Hocaefendi contributed and is still contributing a lot to interreligious dialogue. I met with him in Turkey and the US. We will continue to work together for world peace and our country’s well-being. This is our common goal,” he said.

Stating that Gülen has been carrying out successful peace efforts, Bartholomew said he expects Gülen to return to Turkey soon. “We really love him. We hope he comes back soon,” he added.

He has also written nearly 50 books in Turkish, some of which have been translated into several languages. He was most recently honored with the EastWest Institute’s (EWI) 2011 EWI Peace Building Award for his contribution to world peace.

Bartholomew and Freedom of Worship Award

The Roosevelt Institute praised the Greek Orthodox patriarch for his peace-building efforts and emphasis on interreligious dialogue as it honored him with this year’s Freedom of Worship Award.

“As a citizen of Turkey, Patriarch Bartholomew’s personal experience provides him a unique perspective on the continuing dialogue among the Christian, Islamic and Jewish worlds. He has worked to advance reconciliation among Catholic, Muslim and Orthodox communities in [the] former Yugoslavia and has been supportive of peace-building measures to diffuse global conflict in the Balkans and the Middle East,” the institute said on its website.

“He has co-sponsored international peace conferences, as well as meetings on racism and fundamentalism, bringing together Christians, Muslims and Jews for the purpose of generating greater cooperation and mutual understanding,” it added.