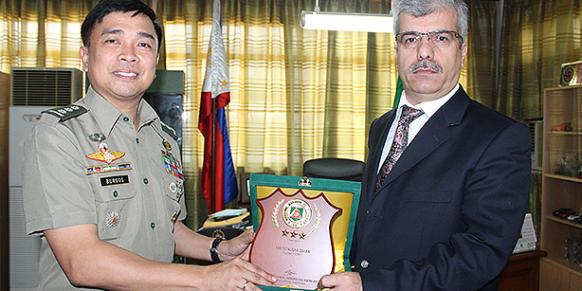 According to the Cihan news agency, Kimse Yok Mu received the award for the third time in the last three years for its food aid to people in need and for search and rescue efforts after Typhoon Haiyan, which hit the Philippines in 2013.

Speaking to Cihan after the ceremony, Colonel Burgos said the Philippine army has worked with Kimse Yok Mu and Turkish schools many times on cultural and aid activities, and thanked the charity, the Philippine-Turkish Trade Chamber and Turkish schools for their efforts in the country. Underlining that the Philippines is looking to work with Kimse Yok Mu in the years to come, the colonel also thanked Islamic scholar Fethullah Gülen for pioneering the aid organization.

“We [the Philippine army and Kimse Yok Mu] sent aid to thousands of people affected by Typhoon Haiyan. We are so lucky. The Philippine army has been fortunate to be the beneficiary of the valuable activities and initiatives of the Turkish institutions,” the colonel said.

In his remarks after taking the award, Gencer underlined that the idea of global education and aid mobilization encouraged by Gülen has been proved once more to be necessary and right by the award being given to Kimse Yok Mu.

The Asian Search and Rescue team, which is under Kimse Yok Mu, returned to Turkey on Monday after search and rescue efforts in Nepal. The country was struck by a 7.9-magnitude earthquake that left more than 6,000 people dead.

Speaking to Cihan after the return, team leader Ayhan Kasap said the team left Turkey on April 25 as soon as they received the news of the earthquake and started conducting rescue operations alongside other local and international teams.

Kasap said they carried out rescue efforts around the Nepalese capital, Kathmandu, and surrounding residential areas, mountain villages and regions where local aid teams, police forces and troops had difficulty in reaching due to landslides.

Kasap stated that the Turkish schools in the country have also given support to them for their search and rescue efforts.

“With the help of Turkish schools there, we managed to access these regions and conducted the necessary searches and inspections,” Kasap said.

The fully equipped team both contributed to search and rescue activities and provided humanitarian aid in the region.

The Turkish Red Crescent (Kızılay) and the Religious Affairs Directorate Foundation have also rushed to the aid of those affected by the earthquake in Nepal.

Turkey’s prominent charity organization Kimse Yok Mu (Is Anyone There) has so far provided over TL 11 million in humanitarian aid to the people of Palestine.

A panel was organized jointly by a think tank, the İstanbul Institute and the Fatih University Politics Club on Monday at Fatih University’s campus located in İstanbul’s Büyükçekmece district.

Eyüboğlu also revealed that the Kimse Yok Mu has intensified its aid efforts in Palestine in recent years, with more than TL 3 million in aid sent to Palestine just in 2014.

Kimse Yok Mu is an international non-profit humanitarian aid and development organization working across Turkey, with 40 branches in 110 countries across the globe. The organization is stems from the Gülen movement, also known as the Hizmet movement, which is inspired by the teachings of Turkish Islamic scholar Fethullah Gülen.