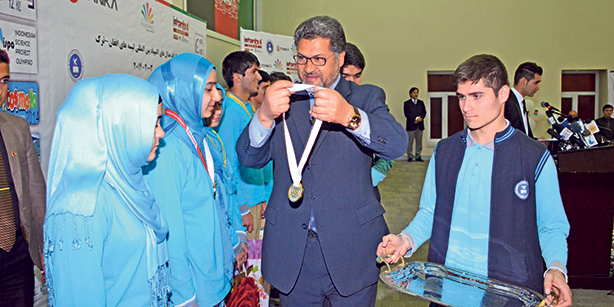 Students from a Turkish school in Afganistan receive medals in the International Science Olympics. (Photo: Cihan)

Muhammad Alim Izadyar: The harm that extremism caused to Islam must be tackled in solidarity

First deputy of the upper house Muhammed Alim Izadyar said, “These terrorists have no idea about Islam. There is no place for violence and terrorism in Islam. If they knew Islam well, they wouldn’t have killed so many innocent victims. There are Western countries that are directly or indirectly backing certain countries home to terrorist bodies. Terrorist acts are therefore increasing every day. Islam has been stained in the Western world. The Muslim world must act in solidarity to clean Islam’s name. The honorable Fethullah Gulen discusses this issue in his article and points out that terrorism has greatly harmed Islam’s image.”

Deputy education minister: Gulen’s views on Islam and education are of great significance

Dr. Mohakkik commented that the conference was a very efficient one. “Fethullah Gulen’s article on Le Monde has given us good messages on learning the true Islamic values. Particularly, his views that democratic values should be taught at early age and incorporated in school curricula are very important. As the deputy minister education of the country, I personally know how much Gulen values education. When we include Islamic values in our curricula, next generations will lean towards friendship, love and understanding, not terrorism.”

Similarly, deputy parliament chair Abdul Rauf Enami said Gulen is an elite person in the Muslim world. He is setting an example of true Islam and Muslimhood in action and words, for the entire world and us.

Former secretary to Karzai Prof. Nematullah Shahrani underscored that terrorism in the name of Islam is actually isolating the Muslims around the world. He went on to say those masterminding terrorists must learn at least tafsir (the Quranic exegesis) before interpreting it.”

Dr. Latif Nazari of Gharjistan University said, Gulen’s article discusses totalitarian ideology, clash of civilizations, anti-Islam arguments in the Western world and imperative to analyze and learn the Quran’s essence. Noting that Gulen identifies these issues with an academic approach, Nazari said, “He has very striking views that terror has nothing to do with Islamic civilization and Western world’s biases against Islam can be overcome with dialog.”

Published [in Turkish] on Samanyolu Haber