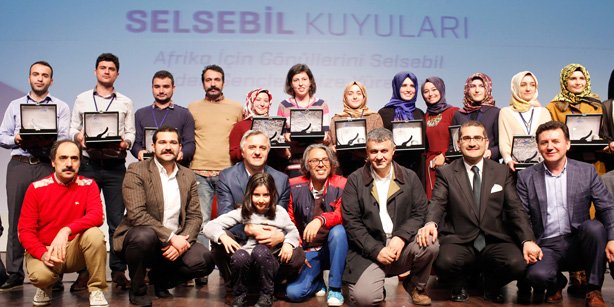 A closing ceremony for the Selsebil project was held at the Fırat Cultural Center in İstanbul's historic Çemberlitaş quarter on Dec. 13, where Turkish volunteers received plaquets. (Photo: Cihan)

Selsebil is the name of a water fountain in heaven mentioned in the Quran.

A closing ceremony for the project was held at the Fırat Cultural Center in İstanbul’s historic Çemberlitaş quarter on Sunday, where Turkish volunteers made speeches about the project.

Project officer İrem Oturaklıoğlu spoke during the ceremony, saying that the project was aimed at creating awareness about the severe drought in Africa. “We are extending [people in Africa] a helping hand with the support of our friends and you. We, as a group of university students, made a decision. We thought that if an African child can’t receive education because of the obligation to look for water, we — as those who are lucky enough to be educated — should utilize all the opportunities we have in order to help them. We started the project under the guidance of the Kimse Yok Mu charity organization; however, we’ve realized that we aren’t alone when it comes to helping people. In Africa, water means family, health, life, being able to worship and having a future,” Oturaklıoğlu said.

Oturaklıoğlu also informed the people attending the ceremony that the end date of the project has been postponed for another year and that they aim to have drilled 5,000 wells by that time.

İsmail Cingöz, president of Kimse Yok Mu, also spoke during the event over the phone and said his heart beat together with the crowd that filled the cultural center. Emphasizing that the project has been supported by many people across Europe and US, Cingöz added: “We have united our dreams with our purposes. No one will be strong enough to disturb this peace. We laid the foundations of this project five years ago. We have witnessed the advancement that comes with water.”

Theologian and writer Cemil Tokpınar said that words fail to express how great the project is and added: “I support these young people with my prayers and appreciation.”

Underlining that the project has supplied the needs of millions of people, Kimse Yok Mu General Manager Celal Türkoğlu said the project also allowed them to protect the lives of thousands of orphans. “Although we live in the same world, those people [in Africa] face problems that we don’t. However, those problems aren’t so hard to solve. [Some problems can be solved by] things such as a well, an orphanage or a school,” Türkoğlu explained.

Thokozani Manguwo, a graduate of a Turkish school in Malawi, talked about the time he first encountered Turks and Islam. “I saw an announcement informing people that a Turkish school had been opened. I went to see it with my father. It was nice and cute.” Stating that he knew nothing about Islam before he attended the Turkish school, Manguwo added that he only knew what was shown on TV — during the war in Pakistan and Afghanistan — in 2011, that Muslims are terrorists.

“Then I started attending the Turkish school. There was a teacher called İbrahim. After I ranked among the highest in an exam, he invited me and my friends over for breakfast. I was so surprised when we went there because it was the first time that we had ever gone to the house of a white person. He set the table ready for us. What’s interesting was that he served us. A white person was serving blacks. I really liked that. … Then I thought, ‘These people aren’t like those I saw on TV; they can’t be terrorists,’” Manguwo said.