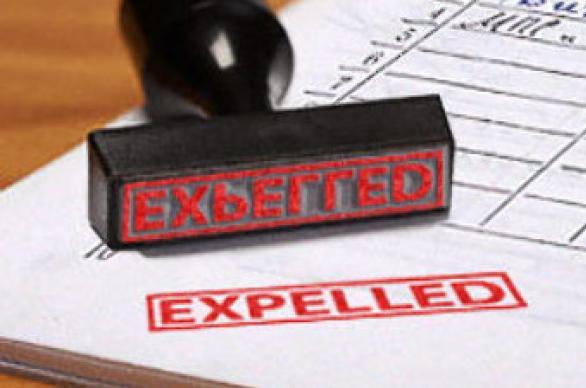 A Turkish newspaper said on Friday one of its journalists had been ordered to leave the country for criticizing Prime Minister Tayyip Erdogan on Twitter, raising concerns about media freedom a day after Turkey tightened internet controls.

Today’s Zaman said its online editor Mahir Zeynalov, 27, from Azerbaijan, was escorted onto a plane in Istanbul by police. The paper is close to influential U.S.-based preacher Fethullah Gulen, locked in a feud with Erdogan revolving around a corruption scandal shaking his government.

Erdogan has cast the scandal as a bid by Gulen, who exerts extensive if covert influence in the police and judiciary, to unseat him and has responded by purging thousands of officers and more than 200 prosecutors. Gulen denies the accusation.

His feud with Gulen, a former ally, has damaged Erdogan ahead of local and presidential elections this year. Ilhan Isbilen, a member of parliament known for his ties with the cleric, became on Friday the latest of half a dozen politicians to quit Erdogan’s AK Party, citing its split with Gulen.

Zeynalov said he had turned himself in at Istanbul airport and been ordered to pay a 103 lira ($46) fine before being put on a plane out of Turkey.

An aide to Erdogan said no instructions had been given from the prime minister’s office regarding Zeynalov. The Foreign Ministry said it had no information, while the Interior Ministry could not be reached for comment.

“This is an utterly despotic and arbitrary decision,” said Bulent Kenes, editor in chief of Today’s Zaman. “We don’t see it as an attack against our paper, it’s an attempt to intimidate all foreign journalists working in Turkey.”

He said Zeynalov – who had in the past been an outspoken supporter of the government, even defending the jailing of some journalists – would continue his work from Baku.

Lawyers for Erdogan filed a complaint against Zeynalov in December over two tweets in which he said the prime minister had interfered in a judicial process by seeking to block the arrest of suspected al Qaeda affiliates, Today’s Zaman said.

Zeynalov’s tweets constitute a “blunt assault on Erdogan’s honor and reputation and his personal rights”, the premier’s lawyers said in a petition submitted to the Ankara Public Prosecutor’s Office, according to Today’s Zaman.

Erdogan’s supporters say efforts to portray the government as facilitating the rise of al Qaeda in Syria’s civil war, by doing too little to prevent weapons and fighters crossing the border, is part of the Gulen-led effort to undermine him.

Posts on the Twitter account AK Kulis, an unofficial channel of support for Erdogan’s AK Party with 77,000 followers, accused Zeynalov of deliberately failing to extend his accreditation so that he would face deportation and could play the victim.

Turkey’s record on media freedom has long been under scrutiny and is among the obstacles to it reaching its ambition of joining the European Union.

The Organization for Security and Co-operation in Europe (OSCE) said Zeynalov’s deportation “for tweets considered inappropriate by the authorities” was a setback for Turkey.

Erdogan’s government is under fire from the opposition and the EU after parliament approved tighter internet controls on Wednesday, enabling web pages to be blocked within hours and individuals’ browsing histories to be stored by the authorities for up to two years.

Social media and video sharing sites have been awash with alleged recordings of ministers including Erdogan and business allies presented as proof of wrongdoing in the corruption scandal. Reuters has been unable to verify their authenticity.

Turkey already has strict internet laws under which thousands of websites have been blocked, from news portals viewed as close to Kurdish militants to gay dating sites.

Google Legal Director Susan Infantino said in a December report that the firm had seen the number of requests from Turkish authorities to remove content from its platforms rise nearly tenfold in the first half of last year.

In the six months to the end of June 2013, it was asked to delete more than 12,000 items, making Turkey the top country on its “request to remove content” list, the report said.

The government says the law, sent to parliament before the corruption scandal erupted but broadened in recent weeks, is aimed at protecting individual privacy, not gagging its critics.