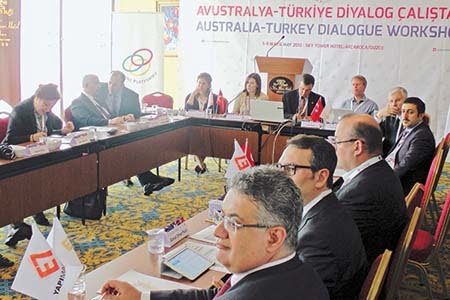 Turkish and Australian perspectives on multiculturalism and diversity differ according to experts talked at a workshop on Tuesday in Akçakoca. Discussing at the second day of the first Australia-Turkey Dialogue Workshop organized by the Abant Platform, participants agreed that multiculturalism was embraced by Australia far before it even began to be discussed in Turkey.

While acknowledging the presence of some people who are not necessarily supporting multiculturalism in Australia, she said contemporary Australian society is multicultural. However, she pointed out the change in the perception of immigrants in the country following September 11. According to her, third-generation Turks were suddenly recognized as Muslims. Yet, she added that multiculturalism has not been a divisive factor in the Australian community. Vamvakinou said that Australia is a “good example for the rest of the world in terms of how to manage diversity.”

Elaborating on diversity in Turkey, Today’s Zaman columnist and former Dutch politician Joost Lagendijk said that diversity and multiculturalism were not welcomed by the Turkish state for decades and therefore was not in the agenda of the country for a long time.

Lagendijk pointed out that official ideology in Turkey favored secular and Sunni Turks while discriminating against others. According to him, that policy came to an end during the Justice and Development Party (AK Party) era because they were among those segments of society that were discriminated against. ¨The AK Party has a much more positive view of the Ottoman Empire, which managed diversity successfully,¨ added Lagendijk before we went on to criticize the current Turkish policies towards foreigners from poorer countries.

¨Most foreigners who come to Turkey these days are from Afghanistan, Somalia, Iran and they are not recognized as refugees,¨ said Lagendijk due to the Geneva Convention, which allows only Europeans to be considered refugees in Turkey. However, according to him, unlike the state, Turkish society welcomes these foreigners from poorer countries.

Directing attention to the progress in the status of non-Muslims in Turkey during the AK Party era, Lagendijk said that non-Muslims have more trust in an Islamic party than a secular one in Turkey.

In critical remarks regarding the establishment of Turkish institutions for Turks living abroad., Lagendijk said that it might make Turks living abroad eternally Turks while preventing them from integrating with their host country. According to him, as a result of its growing confidence, Turkey tries to create diasporas abroad. Chin Tan, Chairperson of the Victorian Multicultural Commission said that even the diverse composition of the Australian delegation at the meeting prove the success of multiculturalism in Australia.

In response to a Today’s Zaman’s question about German Chancellor Angela Merkel’s remark declaring multiculturalism’s death in Germany, Vamvakinou said that Germany never designed programs to incorporate immigrants into the system and allow them to become German citizens easily. On the contrary as she pointed out, it is easier to obtain Australian citizenship. According to Vamvakinou, citizenship is seen as ¨one of the doors to becoming a fully-fledged member of Australian society. ¨ Australian participants emphasized that multiculturalism is their way of becoming a better society.

The secretary general of the Journalists and Writers Foundation (GYV) Hüseyin Hurmalı and author Herkül Millas both pointed out the discriminatory policies of the Turkish Republic especially in its early phases. Hurmalı said that Turkey is on the right track as normalization has started, but ¨we are not there yet.¨ Millas traced the roots of discrimination back to the Ottoman Empire because there was a distinction between the dominant and dominating nation in the state. According to Millas, when the Republic was established, the same tradition continued which led to inequality among different groups in society. ¨Ottoman Empire recognized diversity, but with ambiguity¨ commented Millas.

The two-day workshop that ended on Tuesday was organized by the Abant Platform operating under the GYV as a joint initiative with the Center for Dialogue of La Trobe University in Melbourne and the Australian Intercultural Society.