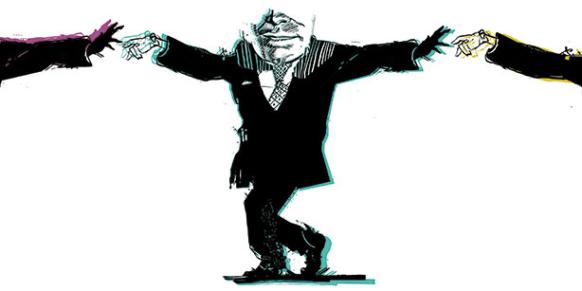 For four months, we have been conducting a study to find out the effects of the ruling party’s hate speech on the Hizmet movement. In this context, three researchers surveyed 81 people from the movement. This study was recently completed. I must note that there was not a single person interviewed who was intimidated or broken down. Although they were upset over the treatment they were exposed to, their beliefs, determination and hopes for the future were not shattered. They see the ongoing process as a “test for them to learn lessons” and are thankful to God for the position they have adopted. They say they prefer being oppressed to oppressing people. They believe the “enormity of that which is to be covered up” explains why the hate speech is being continued so intensely and harshly. They note that the developments have created a far-reaching divide which have started to be visible even in mosques. Everyone had dramatic stories about the process in their families.

Did the movement disintegrate?

The people who are affiliated with the movement can be defined as “disciples,” “brothers and sisters” or “friends.” Disciples are those who treat the Hizmet movement as their own asset; sisters and brothers are those who defend and advocate it; and friends are those who sympathize with it and lend it external support. Our survey found that the process that commenced on Dec. 17, 2013 failed to initiate any disintegration among the disciples but instead increased their awareness, cementing the unity among them. No disciple was lost; rather some disciples who had moved away from the community for different reasons returned home. Those businessmen who finance the services undertaken by the Hizmet movement — called trustees (mütevelli) — fall into this group as well.

About 3-5 percent of all trustees have distanced themselves. The percentage of alienation of those who fall into the category of sisters and brothers varies between 15 and 30 percent depending on the location and profession.

The rate of separation is the highest with the friends (sympathizers) group. Some of the people who do not nurture any sense of belonging to the community, but provide it irregular assistance tend to remain aloof as they believe in some of the propaganda against the community. In addition, a new group of sympathizers has emerged as people draw closer to the community to support it.

The breakaway from the Hizmet movement continued mainly until March 30, 2013, and no considerable separation occurred afterwards. The people who moved away from the community can be grouped as:

a. Those who adopted the “coup” rhetoric marketed by the ruling Justice and Development Party (AK Party) and developed a hostile attitude. The rate of this group is the lowest and it typically consists of those who were introduced to the Hizmet movement more recently. In this group, the rate of those who had ties with political Islam in the past is very high. It accounts for 10-15 percent of those who had moved away.

b. Those who feel confused or afraid although they endorse the Hizmet movement’s activities and believe that these services are beneficial. The members of this group keep a distance from the Hizmet movement fearing that they or their family members may face the risk of losing their jobs. This is the largest group among those who are alienated from the community and hate speech and systematic threats are most influential over this group. This group consists mainly of public officials and businessmen who seek to win public tenders.

c. Those who feel threatened by the government and, to avert this threat, say “I will perform my duties, but let us not meet for some time to come.” This group is the second-largest group. When the hate speech is abandoned and the agenda changes, it can be argued that those in groups (b) and (c) will return to the community. Groups (b) and (c) account for about 80 percent of those who are distanced from the community.

Thus, it is clear that those who have moved away from the community come mainly from those who fall in the friends category, and not from the disciples or sisters and brothers. People who are most vulnerable to hate speech are generally conservative people in the middle and lower-income and education group who live in rural areas whose main source of information is the TV. The fact that the prime minister is directly targeting the Hizmet movement is the main reason why this group is so affected. “A prime minister does not lie,” or “No one should fight the state,” they say. As the level of income and education decreases and as we move from urban to rural areas, more and more people tend to believe that a coup had been staged and the government was not involved in corruption. This applies to women as a group as well.

The members of the community can restrain their anger. However, for those who are directly affected (such as police officers), the language is getting harsher. This indicates that victimization exacerbates hatred/division. Those businessmen who have trade ties with the public sector are forced to side with the ruling party and even if they don’t endorse the practices, they do not object to them. The ruling party use financial audits and state power to intimidate businessmen and these practices have seriously affected those businessmen affiliated with the Hizmet movement. The process has troubled many public officials who are not supporters of the AK Party, forcing them to ally with pro-government organizations and trade unions they would normally not support. Public employees try to prove that they don’t have links with the Hizmet movement. Profiling practices and expectations have altered people’s behaviors, corrupting human relations.

Some parents waited for the results of the March 30 elections to be announced before canceling the enrollment of their children in schools run by the Hizmet movement. These parents are generally bureaucrats and public officials. Reportedly the ruling party specifically targeted these groups with threats of reassignment and investigations. “What would be the percentage of those who would have canceled enrollment if the ruling party had not exerted pressures?” we asked. “Five percent at most,” prep school and school directors replied. This indicates that public authority is being used unlawfully to destroy a social group. The rate of enrollment cancellation was 10-20 percent at schools and 25-35 at prep schools. Those parents who took their children out of the schools fear their children may be “profiled.”

However, it is reported, as the ruling party fails to prove its accusations against the Hizmet movement and as the suspicions about involvement of its members in corruption become stronger, the businessmen who left the movement have started to return and members of the AK Party have confessed that the Hizmet movement is being victimized unfairly.

*Mahmut Akpınar is an associate professor of political sciences.